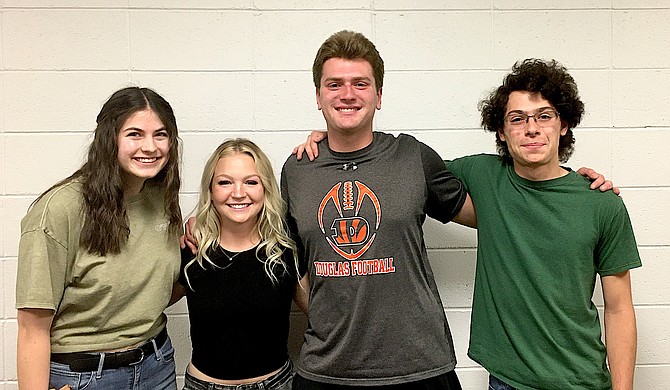 Around 380 students will graduate from Douglas High School at 10 a.m. today, walking barefaced into the future to retrieve their diplomas.

It will be sunny with the temperature around 80 degrees when graduates participate in the 113th Douglas High commencement, which will be livestreamed at www.youtube.com/watch?v=LZsONWgpmYA

Slightly more than half of Douglas High’s seniors turned out on Thursday for a party organized by the Support Our Seniors parents group and hosted by the Carson Valley Inn at TJ’s Corral.

Three quarters of Douglas High School’s top graduates plan to continue their studies at the University of Nevada, Reno.

Jump Start Valedictorian and native Nevadan Hannah Serpa will be the exception, saying she has been accepted at Barrett, The Honors College at Arizona State University in Tempe.

Daughter of Keith and Crisara Serpa, Hannah grew up in Johnson Lane and is a competitive horsewoman.

“I compete with Arabian horses,” she said. “I’ve been riding horses for over 10 years and I do that all around.”

In her letter to Santa published when she was a Piñon Hills second-grader, she asked for a white horse with a brown spot on its back and a brown circle on its eye, showing a lifelong love of equines.

Her decision to go to school in Arizona has a lot to do with horses, as it turns out.

“My horses are actually in Arizona, so I travel there a lot to keep training and competing,” she said. “I’ve been riding horses basically my whole life and that’s part of the reason I chose to go to college in Arizona.

Serpa likes to bake and spent the last year working at a daycare with infants and toddlers, which is something she said she would like to continue. She plans to study psychology and then attend law school after she graduates.

Valedictorian Gavin Casper first appeared in The Record-Courier as a Gardnerville Elementary School sixth-grade chess champion in 2014, not long after his family moved to Gardnerville from Virginia.

The son of Gardnerville residents Rick and Leah Casper, he played all four years for the Douglas Tiger football team. He was named second team offensive tackle in the All-Sierra League.

“I like to compete, whether it’s academics or sports or anything like that, so that’s part of the reason I’m valedictorian,” he said.

Salutatorian Andrew Garet Kalb was the first baby born from Carson Valley in 2004. His picture appeared on the front page of the combined edition of The Record-Courier with his mother and father, Tom and Yvonne Kalb of the Gardnerville Ranchos.

Kalb said his high school career was focused on academics.

“My high school career was purely academically focused,” he said. “I focused a lot on engineering and computer science classes in my AP and honors courses. That is the career I’m interested in so that was fun taking those classes.”

Kalb credits his father with teaching him how to program.

“Computer science has been a big part of my life,” he said. “Since I was 9 or 10 my dad has been teaching me how to code. He taught me everything I know about computer science and coding.”

He and Casper took several of the same classes at Douglas High.

“Like Andrew, I focused on computer engineering,” he said.

The Carson Valley native graduated from Western Nevada College with an associates of science degree.

“A big reason I did jump start was that my sister did it and she’s a big inspiration to me,” she said.

Camara played soccer since she was a girl, winning her category in the Elks Soccer Shoot in 2010. She was on the Tiger JV soccer team for two years before beginning college.

“I stopped playing to focus on school,” she said. “I also wanted the freedom and independence that came with doing college courses,” she said.

Like Casper and Kalb, Camara is going to the University of Nevada, Reno.

“I want to major in biology and see where that gets me,” she said. “I don’t know if that’s exactly what I want to do. I want to try and find an internship and continue working. I want to explore and go places. I think there’s a lot to see and do.”

All four students participated in the National Honor Society.

Serpa and Camara were among 11 students who received associates degrees from Western Nevada College on May 24-25.

Jump Start College was created in 2014 to help more students earn a college degree and to make it financially more feasible.

“We are extremely proud of all of the Jump Start graduates who are transferring to universities or career programs, joining the military or entering the workforce,” said WNC Jump Start Counselor Tricia Wentz.