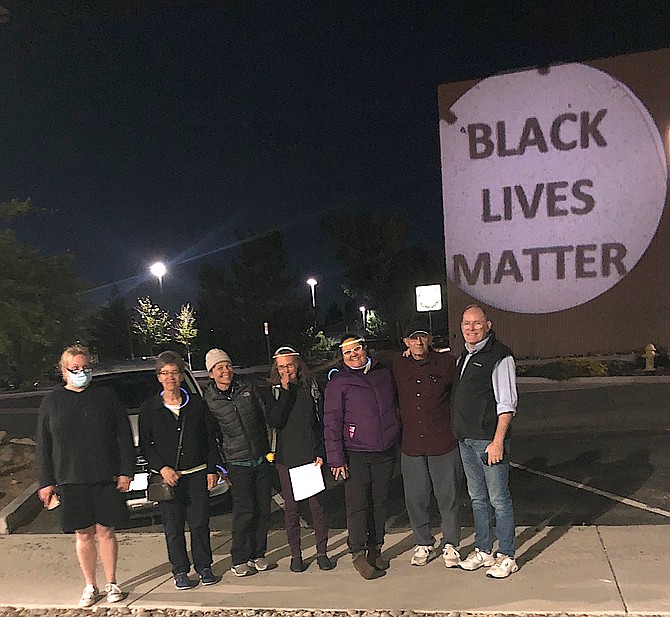 A Black Lives Matter protest shined a light on the Douglas County Judicial & Law Enforcement Center on May 25 in observance of the anniversary of George Floyd's death.
Ed Andrews | Special to The R-C

Also on May 27, the Wall Street Journal front page featured an article, “Cities Reverse Police Funding Amid Rising Crime,” documenting the rush by liberal “defund the police” mayors and councils who had bought into the BLM propaganda to now restore police funding for their citizens who have suffered a year’s worth of arson, looting, indiscriminate beatings and killings.

But the Biden administration has had no such epiphany. Associate Attorney General Vanita Gupta is running investigations of local police departments suspected of excessive use of force “violations,” second guessing law enforcement professionals’ judgment after the fact.

Ryan Graham’s WSJ letter properly labels the whole “woke” movement as an attack on systemic conservatism: self-reliance, Judeo-Christian beliefs, the rejection of historical guilt, and private property rights versus collectivism. BLM and Antifa apologists for street violence cite the “1619 Project” as justification, a fraudulent document that claims America was founded to preserve slavery.

I suspect Dodson’s award was elite condescension, a back of the hand to us Douglas County hicks who criticized Dodson and turned out en masse to stand with Sheriff Coverley and law enforcement and against the BLM demonstrators. Critics of Dodson’s posting were correct then and time has proven that they’re still correct.

Lot more to painting the D than reported

I’m sorry to write a critical response to you, but I feel I need to; regarding the very “brief” account of the DHS students who painted the “D.”

Truth is, it took a great deal of effort and coordination to accomplish this endeavor for the benefit of all residents of Carson Valley.

First, Campbell Dedmon, a junior at DHS was in charge of organizing this project/work.

She conceived of the idea and promoted it amongst her classmates and DHS school staff, supervised by and approved by Ernie Monfiletto.

Campbell wrote a letter and worked with Sundance Helicopters of Minden to have the paint delivered and dropped at the top of the mountain — paint is heavy.

She and her classmates of about 30 students hiked to the site, carried the paint hundreds of yards downhill to the “D” and painted it with rag mops.

Campbell went to every Dollar Store and bought (every) rag mops to use as giant paint brushes.

I feel Dedmon and the DHS students deserve a giant thank you from our community. Given the article, no one would know that and may not even notice how it looks now.

We are proud of your work and that of the R/C staff, but in this case I feel it fell way short of detail and recognition.

Thank you for hearing me out.

Not a good example

Imagine my surprise this morning, when traversing 395 north, from Waterloo, a white Chevy pickup was doing 35 mph in the 25-mph zone. Then, upon reaching Gilman, yellow school lights flashing for the 15-mph zone, it continued at about 30 mph. Changed lanes twice, without signaling, and sped off about 40 mph at 2nd Street.

Not terribly unusual, until you consider the license plate on the truck: State Assemblyman 5. What a fantastic example for one of our “leaders” to demonstrate his respect for the laws that are created by the very body he represents.