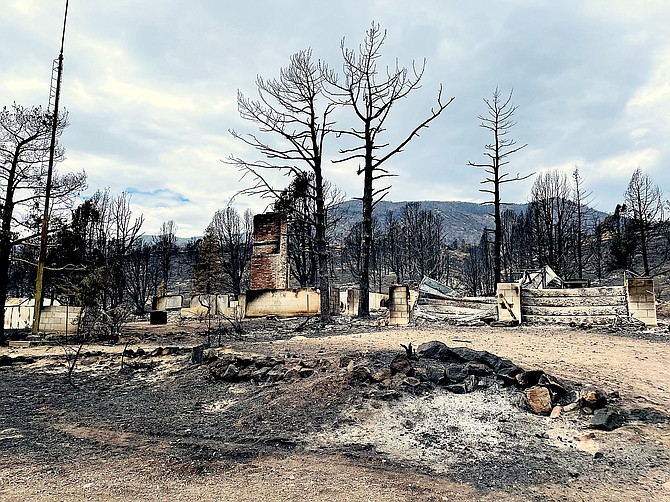 The Addeo’s prospective home in Holbrook Junction was destroyed five days and 15 miles from where their camping trailer and BMW sedan were destroyed at Turtle Rock near Woodfords.
Photo by Kurt Hildebrand.

The Tamarack Fire, after claiming a family’s camper trailer and vehicle in Woodfords, burned another five days and 15 miles to destroy what the Addeo-Johansen clan hoped would be their new home north of Holbrook Junction.

Longtime Carson Valley residents Tara and Ed Addeo and daughter Brittany Johansen sifted through the remains of the home using a borrowed metal detector on Tuesday, the same day escrow was supposed to close on what they were calling their “forever home.”

The Addeos sold their home in Winhaven at the beginning of May after lining up what Ed dubbed The Last Resort in the trees along Highway 395 just north of Holbrook Junction.

Tara Addeo is assistant publisher at The Record-Courier. Husband Ed is service adviser at Capital Ford.

While they were waiting for the sale to close, they were staying in their 35-foot camping trailer, which was located at Turtle Rock Park along with Tara’s blue BMW. The couple left the country on vacation July 15.

The next day, on July 16, the Tamarack Fire grew from what was a single-tree lightning strike to thousands of acres in a matter of hours.

The campground at Turtle Rock Park was packed with Death Riders preparing for the return of the Tour of the California Alps canceled by the coronavirus outbreak in 2020.

But with the fire bearing down on Markleeville, the race was canceled, and the riders cleared out of Turtle Rock, leaving only Addeo’s trailer, her car and an Alpine County vehicle behind.

On July 17, the fire destroyed trailer and the vehicles, and pretty much anything else in its path, including three utility structures.

Because the Addeos were out of the country, they didn’t receive any of the many calls from friends about the fire, but they did receive texts, including a photo of the trailer and car that ended up on Reno television.

“We had renter’s insurance, thank the Lord,” Tara said. “I would recommend that to anyone who has any amount of belongings to protect.”

But most of their belongings were at the Holbrook home, where Johansen and her husband, Matt, were living pending completion of the sale.

The couple spotted the home last year and learned that owner Mitch Jepsen was willing to sell. The couple hoped to retire there, using it for a base to travel. The house was built in 1965 by Jepsen and his father Ralph, members of an old Carson Valley family.

The home survived several close calls with fire over the decades, but then the Tamarack Fire made its run across the Nevada state line and into the Pine Nuts west of Highway 395 on July 21.

The Highway 395 corridor south of Leviathan Mine Road was evacuated. The Johansens were able to retrieve a few items before they evacuated.

“All the plans were already approved, and the architect and contractor were all ready to go until this,” Tara said. “Mitch said he said wants the Addeo-Johansen family to have the property. So, we have to renegotiate. There’s got to be a lot of work done on that property before we can live there. But it’s something we’ve discussed that we want to continue to investigate. It was going to be out forever home.”

Going forward, they have a friend with a casita in Minden they’ll live in until they figure out their next steps.

“We’re going to take a breath and reorganize and figure out where we’re going to be for the next six months, because we really just don’t know,” Tara said.

Until they have an idea of what will happen with the property they are in limbo.

“It’s so surreal,” Ed said. “But it’s hard to figure out anything until we know the direction we’re going to build.”

The entire Addeo-Johansen thanked all the people who reached out to help them.

“We want to say how much we appreciate and have come to understand the community that’s reached out to us,” Ed said. “Not only in the Minden Gardnerville area but as far away as Tahoe and back East from my family. The outpouring is probably the most emotional. There are too many people to thank right now. Just trying to respond to all the people who have reached out.”