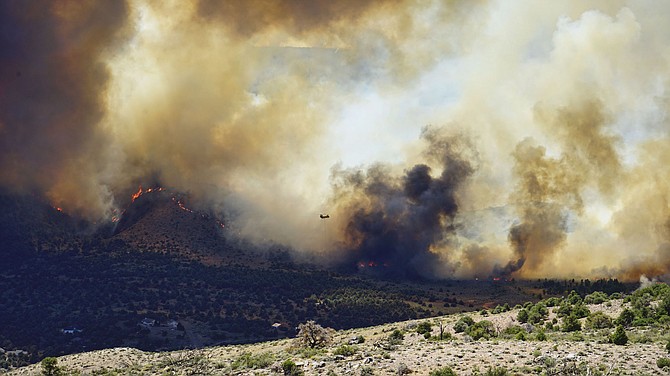 Thirteen Douglas County structures have been destroyed or damaged by the Tamarack Fire in the Highway 395 corridor, according to a preliminary survey.

No fire damage has been seen in Topaz Ranch Estates, Topaz Lake and areas north of Leviathan Mine Road.

Teams consisting of Douglas County building inspectors and East Fork Fire Protection District personnel are working with the county’s GIS department to verify which structures and areas have been affected and to notify property owners as soon as possible. Areas with known damage will be prioritized for assessment first.

The county will prepare a damage assessment map of the region and will release it soon.

“This fire has presented some significant challenges like no other I have seen for some time,” said East Fork Fire Chief Tod Carlini. “The weather conditions and fuel density in most areas have led to some very erratic and dangerous conditions.”

Carlini thanked residents for their cooperation and to firefighters who have been fighting the blaze that burned 65,000 acres over 20 miles from the Sierra to the Pine Nut Mountains.

“I also want to extend my appreciation to all those personnel who have been staffing and managing evacuation shelters in both Gardnerville and at Smith Valley High School in Lyon County,” Carlini said. “The community, service club, and faith-based groups that have helped in this effort are amazing. Our priorities remain the safety of the public and fire suppression personnel, to see that the fire is extinguished, and to begin a recovery, which includes re-populating evacuated areas when it is safe to do so.”

All evacuations for Douglas County remain in place and 395 remains closed for public safety concerns.

My heart and prayers goes out to anyone who lost during this horrific fire. Want to thank all the people working to help those in need and the ones fighting the blaze. God bless.