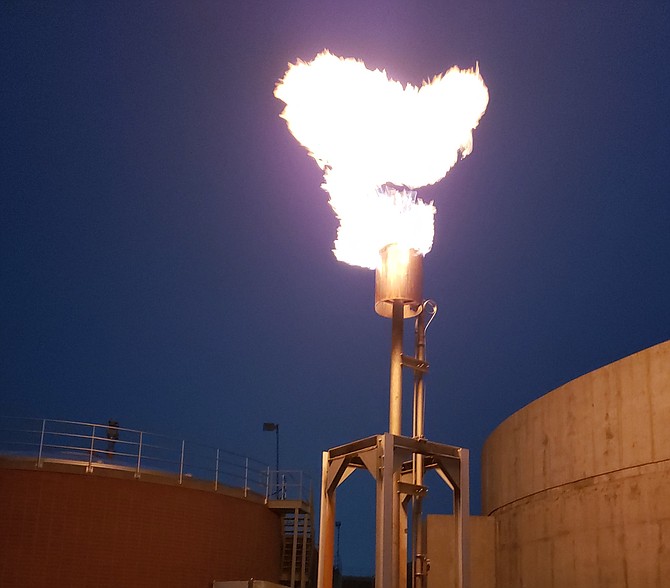 A flare from the Minden-Gardnerville Sanitation District burns off excess methane that's part of the normal process at the plant located next to the Ironwood Center. MGSD Photo

With wildfire season in full swing, it’s no surprise that there have been some calls from concerned residents about a fire at the Minden Gardnerville Sanitation District sewer plant.

While the callers are right about the fire, that’s normal operating procedure for the plant located on the north end of Minden.

“We’ve had some concerns in the community about the gas flare,” District Manager Peter Baratti said. “It’s pretty high up there, and noticeable from Highway 395 and Muller Lane.”

At 15 feet tall, the new flare that burns off excess gas from the plant is slightly more than twice as tall as the old one.

“We do an anaerobic digestion process that uses three large vessels like stomachs that are heated to 96 degrees,” Baratti explained. “That keeps the bugs warm, and they eat the solids and break that stuff down to acids and methane.”

The plant recaptures the methane to use for fuel for the plant’s boilers to keep the digesters warm and a co-generation process that makes electricity.

But sometimes there’s too much methane and the plant isn’t allowed to release it into the air.

“We can use it for heat and electricity, but what’s left over we have to flare off, and that’s where the flame comes from,” he said.

“We have some willows in the foreground and you can’t see there’s a building there,” he said. “We’ve had a pretty large influx of people who don’t even know we’re basically right in town here.”

That wasn’t always true, though the plant has never moved. Minden has come up to it and kept going.

Voters of the towns of Minden and Gardnerville approved the creation of the district 180-12 on Jan. 7, 1964. The district is managed by a five-member elected board. Before he was the longest serving legislator in Nevada history, Lawrence Jacobsen won a short term on the board.

Also serving on the first board were Fred Settelmeyer, Roy Crowell, Dan Hellwinkel and Knox Johnson. The plant opened in 1967.

The district provides sewer service to the towns of Minden and Gardnerville, along with the Gardnerville Ranchos.