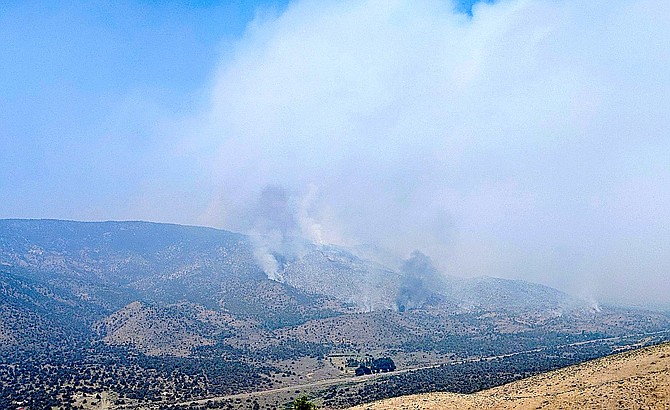 Smoke pours from the Tamarack Fire on Thursday morning in this photo taken by Topaz Ranch Estates resident John Flaherty from Gold Hill.

With the Tamarack Fire rampaging around southern Douglas County, commissioners declared a state of emergency as a precautionary measure on Friday morning.

The fire, which burned across the state line on Wednesday, is threatening Holbrook Junction, Topaz Ranch Estates and Topaz Lake.

The fire which has been smoldering in the Sierra near Blue Lakes Road since July 4, took off on July 16 forcing evacuation of hundreds of Alpine County residents from Markleeville and Woodfords.

“The declaration will be submitted to the State of Nevada and will allow regional partners to speed up the delivery of resources required to respond more effectively to the emergency and meet the needs of the community,” Douglas County spokeswoman Melissa Blosser said. “Many federal, state, and local government agencies including East Fork Fire, Douglas County, and the Douglas County Sheriff’s Office as well as organizations and businesses are cooperating to respond to the fire.”

Most south county residents have been urged to evacuate and communities elsewhere near the state line have been alerted to the possibility, including Fredericksburg, Sheridan, Ruhenstroth and Pine View Estates.

The Douglas County Community & Senior Center is serving as an evacuation center for Alpine County residents, while south county residents are being directed to Smith Valley High School after the community center in TRE was closed due to fire danger.