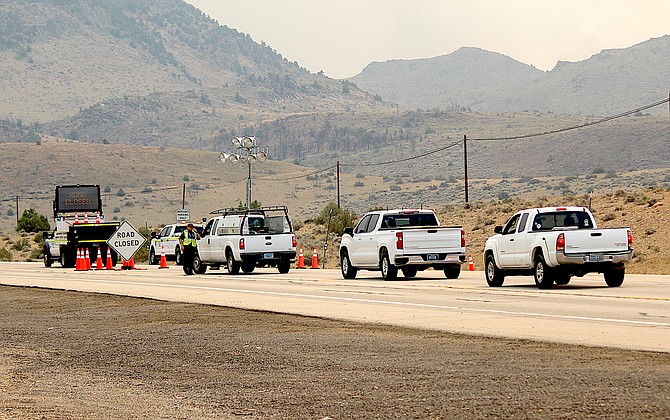 Vehicles line up at the Highway 395 closure in Bodie Flat for an escort through the fire area at about 1:40 p.m. on Thursday, about 10 minutes before the escorts were halted.
Photo by Kurt Hildebrand.

Genoa, Nev. — Mapping at nevadafireinfo.org shows the Tamarack Fire burning in the Pine Nuts north of Topaz Ranch Estates and heading east. Some East Fork and surrounding local firefighters called in for structure protection on Thursday afternoon were released last night, which I’m taking as a good sign.

There’s no indication the fire’s come down from the ridge this morning, though the Bald Mountain Alert Wildfire camera showed flames until about 5:30 a.m. That might be because it was dark. The fire is still showing smoke pouring from the blaze.

NV Energy is listing 824 homes and business without power in Topaz Ranch Estates and another 457 in the Highway 395 corridor south to Topaz, according to NVEnergy.com

The estimated power restoration for TRE is 8 a.m., though that time has been delayed several times since around 3:30 p.m. Thursday. The rest won’t be up until 10:15 a.m. as the power company repairs damage to its lines.

My new favorite fire mapping tool is the Fire Information for Resource Management System, which is a joint project by NASA and the Forest Service. It lets you measure area and distance pretty easily. It’s based on MODIS heat maps, which can be pretty scary, so remember eyeballs are always better than the Internet.

I heard from Topaz Ranch Estates resident John Flaherty this morning, which is also a good sign. Here’s hoping all Douglas South County residents are safe and back in their homes soon.

As near as I can tell, the Mayhemilition demolition derby supporting the Silver and Sage Livestock Show is still on at the Douglas County Fairgrounds 7 p.m. tonight. The livestock show is the successor to the Carson City Fair and will be going through the weekend.

Young at Heart Bingo on Saturday and the senior exercise classes are canceled because the Douglas County Community and Senior Center is serving as an evacuation center. Check with organizers on anything at the center this weekend.

The Ranchos Aspen Park air quality monitor is showing a reading of 158 this morning or just over the line into unhealthy levels. Visibility at Minden-Tahoe Airport is 10 miles with the wind calm.

Expect widespread smoke and haze today under sunny skies with a high of 96 degrees. The wind is forecast to be lighter today out of the west at 5-10 mph this afternoon then increasing to 5-15 mph this evening.