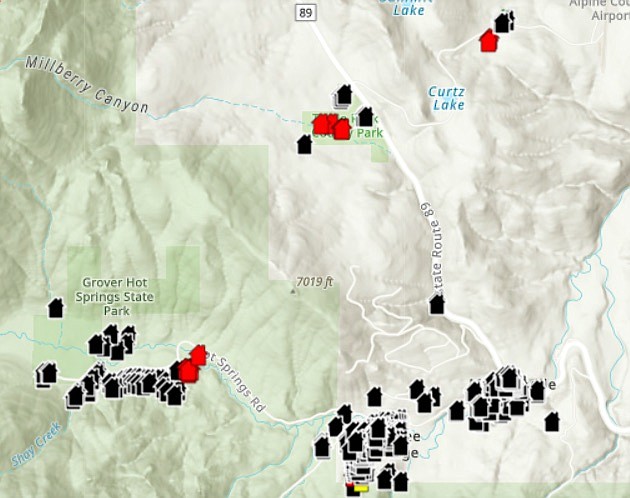 A map of damaged and destroyed structures has been released by Alpine County.

Alpine County released a map of structures destroyed in the Tamarack Fire on Friday afternoon.

According to the map, eight homes were destroyed, with five in the vicinity of Shay Creek Road, two off Pleasant Valley Road and one south of Airport Road.

A commercial structure was also destroyed in the Shay Creek neighborhood.

A half dozen utility structures were lost in the fire as it raged through the center of eastern Alpine County. Three of those were located near Indian Creek Reservoir and three more at Turtle Rock Park.

The site is located at www.alpinecountyca.gov/593/Maps

“Field damage inspection is still ongoing and subject to change,” Alpine officials said. “If your structure is not identified, it has not yet been identified.”

Residents may put their addresses into the site and find out their home’s status if it has been included.

Alpine residents were being escorted to their homes to retrieve personal items on Friday.

The area of Alpine County between Highway 89 and the Carson River is one of the few parts of the Tamarack fire’s perimeter that has seen any containment.

Firefighters kept the blaze from crossing Highway 88 and burning up the mountain toward Lake Tahoe.

The Tamarack Fire was first reported July 4 as a single tree as a result of a lightning strike. Forest Service personnel determined the fire posed little danger of spreading and a week later is was still only a quarter acre.

However on July 16, the fire spread rapidly driving residents of Grover Hot Springs and Markleeville out of their homes.

According to the map, all of the town of Markleeville survived.