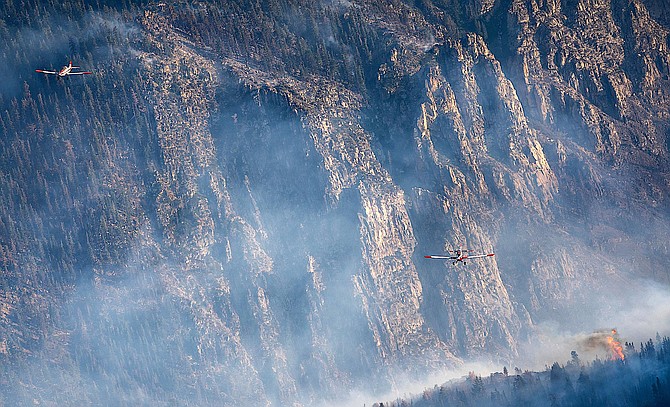 Single engine air tankers fly in formation over the rugged mountains where the Tamarack Fire has been burning out of control for a sixth day. U.S. Forest Service Photo

Douglas County authorities wrapped up conducting evacuation notifications in Topaz Ranch Estates around 8:30 p.m., as the Tamarack Fire continues to burn toward the community of around 1,600 people.

According to the Fire Information for Resource Mapping application, the nearest hotspot is within a mile and a half of the south county community located on the north edge of Antelope Valley.

On Thursday morning the fire was estimated at 50,000 acres, which didn’t include much of Nevada, including a 2,500-acre spot fire north of Holbrook Junction. The area indicating hot spots in Nevada on the fire map, covers 14,000 acres, meaning the fire easily has reached 60,000 acres total.

Firefighters were trying to prevent the fire from cresting Gold Hill, which separates Holbrook Junction from Topaz Ranch Estates.

Lyon County authorities notified residents of Smith Valley near Wellington, east of TRE, they should be prepared to evacuate.

Lyon County Manager Jeff Page asked residents to make sure that they have medication, pet food and important documents packed up in a go bag ready to leave, should the fire continue to burn east.

Firefighters reported a downed power line north of Holbrook Junction where a 2,500-acre spot fire was burning on the east side of Highway 395.

Electricity is out to 1,281 NV Energy customers and isn’t expected to be restored until 2 a.m., if then. Of those 824 homes and businesses are located in Topaz Ranch Estates while another 457 are along the Highway 395 corridor.

The Tamarack Fire has been burning aggressively into Douglas County since it crossed into Nevada on Tuesday night.

An attempt to escort vehicles through the fire area on Highway 395 lasted about an hour on Thursday before the fire took off, with flames approaching the rest stop north of Holbrook.

The fire’s expansion resulted in a second effort to encourage Topaz Ranch Estates residents to evacuate. The evacuation center is at Smith Valley High School, which is surrounded by irrigated fields.

Fire officials said the fire is 4 percent contained, entirely on the northwest flank near Woodfords.

“After a day of extreme fire behavior, fire continues to burn actively,” officials said at around 9:15 p.m. Thursday. “Humidity recovery overnight is expected to be poor with light winds continuing to influence fire conditions. With the burn period extending into the night, firefighters are engaging in structure protection around the fire protecting homes and infrastructure in communities affected.”