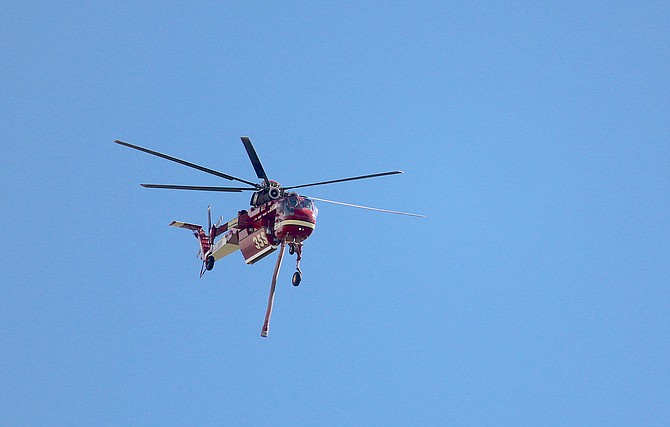 A firefighting helicopter returns from a drop on the Tamarack Fire near Woodfords.
Photo by Kurt Hildebrand.

Mapping on the Tamarack Fire shows hot spots on the east side of Highway 395. Search and Rescue reported spot fires on that side around 7:15 p.m. but that firefighters doused them. They were working on a plan for evacuation notices in TRE and Topaz Lake, which was put in place round 10:45 p.m.

The Tamarack Fire has cut off the southern approaches to Douglas County with the closure of highways 395 and 88. There are 287 NV Energy customers from Ruhenstroth to Holbrook who lost power last night due to the fire. nvenergy.com says that should be restored by 8:45 a.m. Given that the fire is continuing to burn, I would expect that time to be pushed back.

Residents of essentially the entire south county were advised to evacuate last night after the fire reportedly crossed Highway 395. The fire officially grew to 43,900 acres after an infrared flight on Wednesday morning, but I’ll wager it’s bigger this morning.

The Fire Information for Resource Management System map this morning is showing hot spots climbing into the hill toward TRE from the west this morning. As we’ve seen a couple of times that doesn’t always translate to fire on the ground, but it has been a fair indication of which way the fire wants to go. This is the really long link to that tool https://firms.modaps.eosdis.nasa.gov/usfs/map/#d:2021-07-21..2021-07-22;l:noaa20-viirs,viirs,modis_a,modis_t,active-usa,active-ca,country-outline;@-119.5,38.7,13z

The northwest side of the fire burned up the mountainside visible from most of Carson Valley on Wednesday. The mapping doesn’t show it extended much past Highway 88. The nevadafireinfo.org cameras for Hawkins Peak and Bald Mountain show the fire burned through a sixth night. It will be 8:30 a.m. before the national situation report is available. I’ll post what I find there when it arrives.

Air Quality in the Gardnerville Ranchos is at 228 this morning or very unhealthy. Minden is showing 182 or just unhealthy. Visibility at Minden-Tahoe Airport was at 5 miles at 6:35 a.m., up from 2 miles around 6 a.m.

The smoke will stick around until 11 a.m., according to the forecast and then go to widespread haze. Winds will pick up out of the west at 10-15 mph this afternoon, gusting to 25 mph. The high is expected to hit 94 degrees under sunny skies.