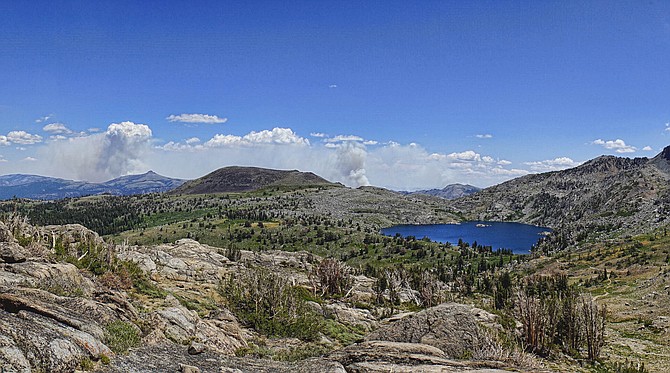 The Tamarack Fire from Carson pass above Winnemucca Lake. Because the Pacific Crest Trail is closed at the ranger station, photographer John Flaherty said he hiked from Woods Lake to reach this spot.

If there’s a road, trail or campground on National Forest land in the Carson Ranger District anywhere near the Tamarack Fire, assume it’s closed.

On Wednesday night, the Humboldt Toiyabe National Forest issued an order closing everything within the boundaries of the Tamarack Fire, which is burning out of control east and south of Carson Valley.

The order includes a map, but with the fire spreading fast, it’s likely that will be obsolete in a couple of hours.

“Predicted fire weather and fire behavior may be extreme,” Deputy Forest Supervisor Jon Stansfield said. “We are asking the public to comply with this closure and stay out of the area, so we can focus on suppressing the fire.

This morning fire officials revised the estimate for when the fire would be contained to Aug. 31. There are portions of the fire that won’t be extinguished until the snow flies.

The California Department of Transportation closed Monitor Pass on Wednesday night due to the fire, along with Highway 395 from the state line south to Coleville.

The Nevada Department of Transportation closed Highway 395 from Leviathan Mine Road south to Holbrook Junction, leaving the spot between the state line and Holbrook open for now.