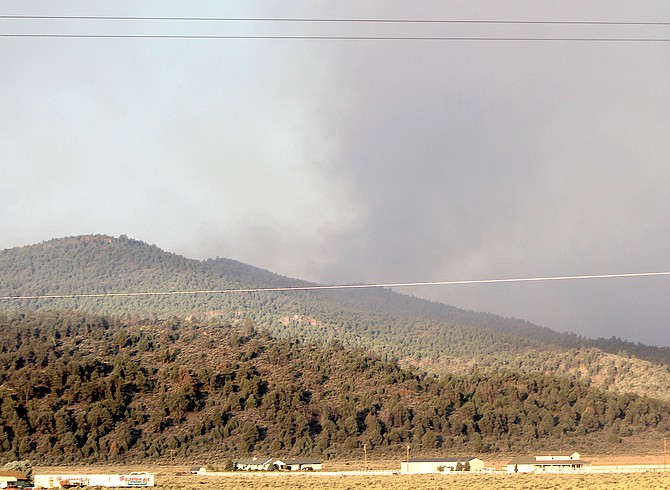 Smoke rises over the ridge from Double Spring Flat near Leviathan Mine Road in the Pine Nut Mountains on Wednesday morning from Highway 395.
Photo by Kurt Hildebrand.

Genoa, Nev. — There’s smoke on the ridge above Double Spring Flat but no flames as of sunrise this morning. I didn't see any flames from the Tamarack Fire between Leviathan Mine Road and Holbrook Junction on my run down there at dawn. That doesn’t mean there won’t be, or that the fire isn’t burning in that direction, because it pretty clearly is looming over that area.

There’s a possibility the fire crossed the state line last night, with the latest Nevada Wildfire Information Map showing hot spots approaching the area, but just as Sunday’s map showed hot spots across Highway 88 in Woodfords, those might be actual or noise. All I know is I didn’t see any flames from the highway at 6:45 a.m.

Evacuations are still in effect for the Double Spring and Holbrook Junction area this morning, because the Tamarack Fire is still a giant amoeba and only the wind knows where it will go next.

Folks can bring their pets with them to the evacuation centers at the Douglas County Community and Senior Center and the Topaz Ranch Estates Community Center. Livestock is being evacuated to the Carson City Fairgrounds because Douglas already was booked for events.

Most of the smoke from the fire is gathering in the Pine Nuts and southeastern portion of Carson Valley from what I could see after driving down to Holbrook. Air Quality at 6 a.m. was 169 in the Gardnerville Ranchos, or unhealthy. If you’ve got breathing problems better to stay indoors today.

Visibility at Minden-Tahoe Airport is 3 miles as of 7 a.m., but it’s been bouncing up and down all night, dropping down to 2.5 miles at 6:30 a.m. There isn’t much of a breeze, but wait a bit, the wind will come.

Today’s forecast is for smoke before 9 a.m. and widespread haze before 3 p.m. The high today is forecast to hit 94 degrees with the wind picking up out of the west at 10-15 mph, gusting to 25 mph.

Kurt Hildebrand is editor of The Record-Courier and has been covering fires in the Sierra since 1989. Reach him at khildebrand@recordcourier.com