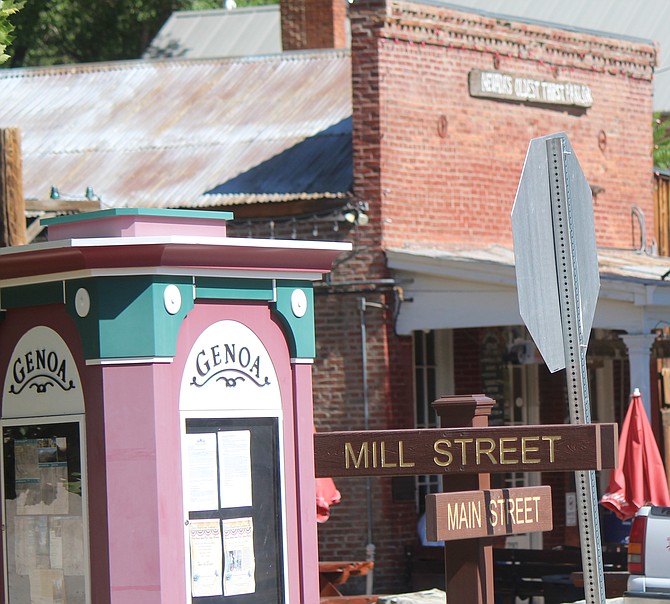 Mill and Main streets in Genoa.

Genoa residents of Mill Street handed a petition to the town board earlier this month seeking a solution to the traffic in town.

The petition carries 13 signatures from a half dozen Mill, two Genoa and one Main Street address.

Diagonal parking created on the south side of the street during the 2014 town revitalization, which residents are pointing to as a primary cause.

“Due to the high volume of traffic moving through Genoa since the revitalization … and the increased number of events in The Genoa Park, Mormon Station State Historic Park, Orchard House and especially the Genoa Bar, Mill Street has turned into the prime parking lot for all this activity.”

“I have empathy for my neighbors on Mill Street and would like to help resolve this issue,” Webb said.

However, he did wonder whether a proposal to make the street one way heading east wouldn’t send traffic into the rest of the neighborhoods.

Petitioners said that Mill Street is narrower than Carson and Genoa streets.

Because the historic homes were built close to the road, with some locations only having on street parking.

“With outsiders parking on Mill Street, residents have no room for themselves or their guests to park,” petitioners said. “So, in essence, residents are consistently giving up their parking spaces for the businesses.”

Making Mill Street one way would cause traffic to flow from Genoa Street to Main Street, according to the petition.

Signs have been placed on either side of Main Street urging visitors to be respectful of the town.