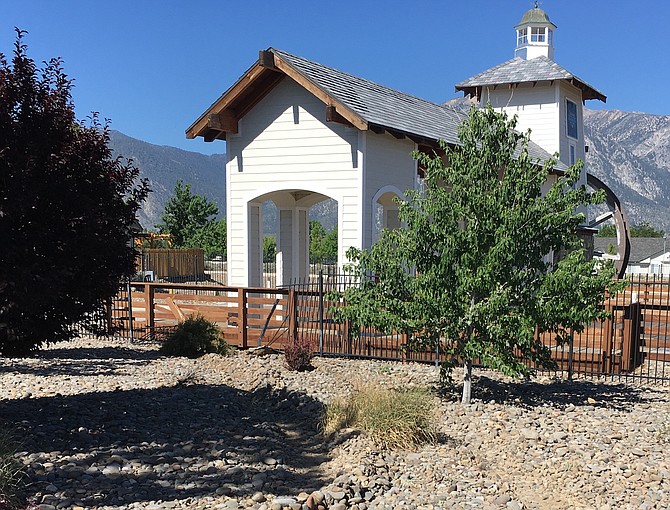 Tracks across the gravel in the landscaping at the Tahoe Douglas Elks Lodge lead up to the fence that was struck on Monday evening.
Photo by Kurt Hildebrand.

Workers were focusing on repairing the irrigation system at the Tahoe-Douglas Elks Lodge on Thursday after a man drove a pickup across the landscaping and hit the fence on Monday evening.

The driver of the Ford F-350 pickup that charged through the front of the property was released from custody on Wednesday after being told he was lucky to be alive.

Derrick Douglas Teig, 32, is accused of driving under the influence after he allegedly huffed canned air and passed out, driving the big pickup through the Elks’ landscaping heading right for the windmill on the neighboring property.

The collision was the second involving a suspected impaired driver in three days.

Sara Rodriguez-Tegerdal, 36, is accused of being the driver of a silver Toyota that was involved in a crash at Kimmerling and Bing Road 5:45 p.m. July 9.

According to the sheriff’s report, Rodriguez-Tegerdal got out of her vehicle after the wreck and was witnessed stumbling on the road before getting back into the Toyota and crashed into someone else.

Witnesses said she was eastbound Kimmerling near the Post Office in the westbound lanes narrowly avoiding an oncoming Jeep. Another motorist started honking at her and Rodriguez-Tegerdal stopped in the road, got out and tried to talk to the other driver. Another driver pulled in front of her in an attempt to keep her from leaving, but she got back into the car and ran into him and an unknown pickup towing a trailer.

With all the impaired drivers, do you really think it is a good idea to promote drinking with Wine Walks, Drink & paint, sip & craft, etc.??? So many activities that are fun on their own & don't need to add drinking alcohol.