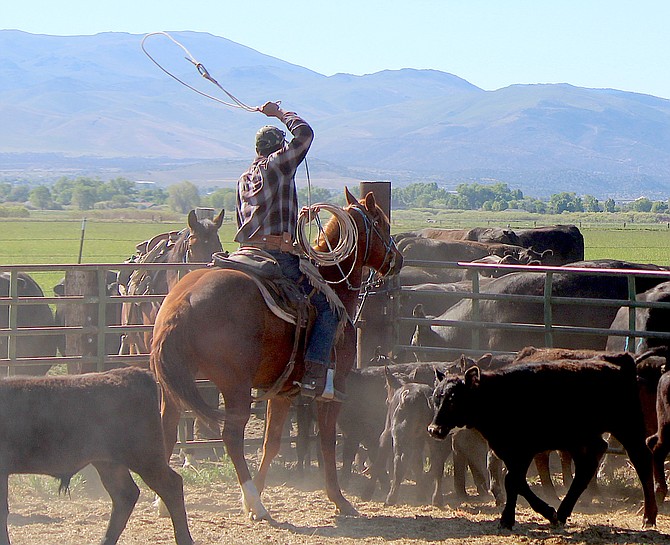 Calves are roped and branded on the Park Ranch Holdings property off Buckeye, not far from where a small meat processing plant is proposed.
Photo by Kurt Hildebrand.

A small meat-processing plant being proposed for a site off Buckeye Road is seeking a permit at the Douglas County Planning Commission on Tuesday.

The plant will process 20-60 animals Monday through Friday, with a maximum of five employees, owner David Park said in a letter to the county.

The actual meat processing would be done inside 9,320- square-feet of an existing 40,391-square foot barn located on a 41-acre parcel at 1300 Buckeye Road.

The building hosts the headquarters for Park Ranch Holdings, along with other agricultural and farming operations.

A special use permit is sufficient to operate the plan as long as it is limited to 60 larger animals or 200 poultry or rabbits a week and doesn’t include retail sales.

Processing operations would be conducted within the building, which planners described as remote from housing. The nearest landmark is the former Bently Meats store off Buckeye.

Park Ranch isn’t proposing any additional parking or paving improvements to the site, though the building will have to be remodeled to adapt it to the meat processing.

Wastewater treatment would be accomplished through a commercial sewage disposal system, that would require approval from the Nevada Department of Environmental Protection before any building permit or certificate of occupancy would be approved.

Animals would arrive in stock trailer and would be unloaded and kept inside a covered building prior to being slaughtered.

It has been nearly a quarter of a century since Carson Valley Meat Co. was torn down to make way for Chichester Estates. Since then, ranchers have had to take their animals to Wolf Pack Meats or Fallon for slaughter.

Ideas such as a mobile slaughterhouse have been suggested but have not come to fruition.

Two years ago, a proposal to establish a meat processing plant at Centerville was rejected after public outcry from neighbors.

Even some of the most vocal opponents to the Centerville site acknowledged the need for a slaughterhouse in the Valley.

For more information, visit www.douglascountynv.gov and click on agendas and minutes.

If commissioners allow this one but that lady who bought the old dairy and is trying to convert it into a S-house is still denied, that shows some real favoritism in this valley with who your family name is tied to. Corruption and pay offs, I hope she sees this and uses it as fuel for her case.