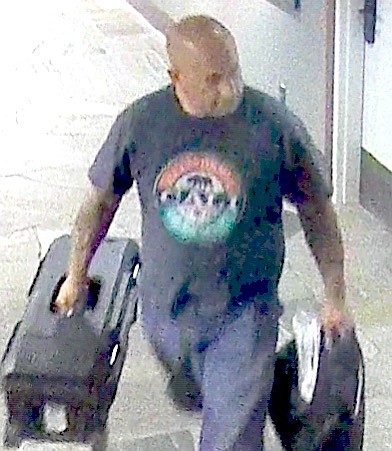 The Douglas County Sheriff’s Office is seeking the public’s assistance in identifying a person of interest in a burglary and possession of stolen property investigation.

The crimes being investigated were committed during the late on May 31 at Carson Valley Inn located in Minden.

All other leads generated have been exhausted.

Anyone with information is asked to contact Deputy Steven Warfield at 775-782-5126.

• Scammers called a Gardnerville resident on Monday claiming to be from a television service provider and saying they need a credit card to upgrade the receiver due to a change in broadcast frequency.

Don’t give people who call you out of the blue your credit card, Social Security or phone number.

• A skimming device was found on the South Lake Tahoe Bank of America walk-up teller on Tuesday. Designed to collect credit and debit card information from ATM machines and gas pumps, the devices can either transmit to a receiver or record the information for use to commit fraud.

The device had been placed on the ATM sometime in the prior two weeks.