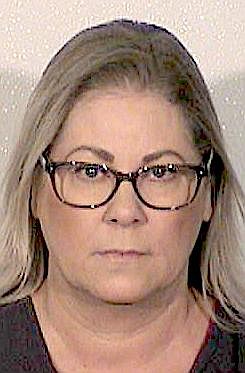 The debate at a Minden bookkeeper’s embezzlement sentencing on Monday wasn’t over whether she forged her employer’s name on checks but how much she owed as a result.

Ananda Marshall, 51, was ordered to pay $26,779.60 in restitution to Hutt Aviation after she testified she stole from the company out of resentment.

Hutt also sought reimbursement for the health insurance copay and for checks written to her spouse.

Marshall’s husband took the stand to testify that he did work for Hutt for each of the checks that were written to him. The insurance issue was more complicated, because Marshall claimed she and the owner agreed the company would pay 100 percent of her family’s insurance.

While disputing the larger amount, defense attorney Justin Clouser said his client definitely did embezzle from the fixed base operator at Minden-Tahoe Airport.

“We’re willing to make full restitution,” Clouser said. “But we’re not going to allow Hutt to make a profit.”

Marshall testified that the family dynamics at the company fueled her resentment. When asked why she didn’t find work elsewhere, she said the work was close to home and that she was paid reasonably well.

In a victim statement, the daughter of the business’ owner said the theft was difficult for the company just as the coronavirus lockdown arrived.

“When we found out the checks didn’t add up, my dad burst into tears,” she said. “We had to lay off employees as a result.”

District Judge Tom Gregory pointed out that he’d never heard a defendant say they stole out of resentment.

“It’s never a good idea to steal, but usually someone does it because they can’t pay their bills. This is the first time I’ve heard someone say they stole out of resentment.”

While ordering the smaller amount of restitution, Gregory pointed out there’s no reason Hutt couldn’t sue for the rest.

Marshall received a 19-48 month prison term suspended for two years. A large portion of the restitution will come out of the $25,000 cash bail Marshall posted. She will also have to notify current and future employers of her embezzlement conviction.

David John Caylor, 54, was on house arrest for felony driving under the influence when he purchased a .45 caliber handgun on July 26, 2020.

Instead of sentencing Caylor on Monday, District Judge Tom Gregory delayed the case, and ordered him to seek treatment.

Caylor, who is not allowed to have a firearm for reasons in addition to being a felon, apologized to the court.

“I don’t want to go back to prison,” he said. “I do a lot better when there are people pointing me in the right direction.”

Both defense attorney Maria Pence and prosecutor Patrick Ferguson said they wanted to make sure Caylor had a support system when he is released from custody.

Gregory set a July 19 status hearing and sentencing for Oct. 25.

• A Sunridge man received a 364-day jail sentence on Monday on a count of gross misdemeanor child abuse.

Anthony Allen Hynick admitted to the Dec. 3, 2020, incident that included battering his wife and knocking down one of his four children during a fight at his home.

Hynick was taken into custody after the sentence was pronounced.

During a victim impact statement, the children’s mother said Hynick threatened to kill her in front of them.

“When he saw the children were recording with the phone, he chased them around,” she said. “We feared this person who told us he loved us the most.”

She said she distracted Hynick and the children ran out to the neighbors to ask someone to call 911.

She said the children are in therapy and that six months wasn’t enough time to undo the damage Hynick had done.

“What he did says everything about him and nothing about us,” she said.

Hynick said he was self-medicating during an emotional time as his marriage was falling apart. Attorney Maria Pence said Hynick sought help before the incident and had been prescribed medication but stopped taking it.

• A Reno man admitted to attempted possession of a motor vehicle on Monday.

Adam Tyler Gusman, 27, faces either a felony or gross misdemeanor in connection with the theft of a Honda Accord on Feb. 11. If the charge is treated as a felony he faces 1-4 years in prison at his Aug. 30 sentencing. Gusman is free on bail.

• A Placerville man, who was scheduled to appear in Douglas County District Court seeking a diversion program, died of an overdose on June 11, his attorney said.

Randy Allen Olson, 48, admitted to possession of methamphetamine in connection with a Dec. 11, 2020, arrest.

Attorney Maria Pence showed prosecutors a notice that Olson was dead in court and asked for 30 days to get something more official.