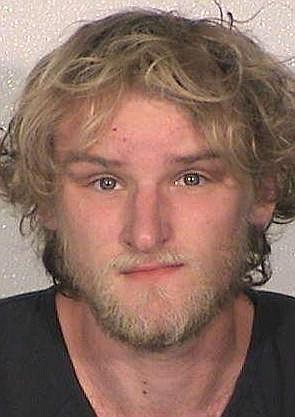 A California man who was under the influence when he crossed the centerline on Highway 50 last June was sentenced to 2-5 years in prison on Monday.
Matthew James Klausen, 23, crossed the centerline on June 8, 2020, in a Honda Civic and ran headlong into a Toyota Tacoma pickup.
“I am truly sorry for all the pain and suffering I caused,” Klausen said during sentencing. “I promise nothing like this will occur again.”
The other driver suffered severe injuries including a lacerated spleen and several broken bones.
Klausen admitted one felony count of driving under the influence and causing substantial bodily harm in December.
Attorney Joe Laub said that if not for the mandatory prison sentence, Klausen would have been a good candidate for probation. Klausen had a clean record before the collision, Laub said.
District Judge Tom Gregory ordered Klausen to pay $1,785 in supervision fees in addition to the mandatory minimum $2,000 fine. He was ordered to return to court after his release from prison to set up a payment schedule.
A firearm found in the Civic with Klausen was forfeited as part of the sentencing. Because he is a convicted felon, Klausen will not be allowed to own the weapon.
• The former controller for the Hard Rock Hotel Casino at Stateline was ordered to spend the next 30 weekends in jail as a condition of his probation on a felony embezzlement charge.
Robert Merrald Schrader, 55, was ordered to repay $71,832.60 and received a suspended 12-30 month prison sentence on Monday.
Prosecutor Patrick Ferguson argued that Schrader should go to prison for the crime, saying that the thefts occurred over the court of a year, during which Schrader tried to cover his tracks.
Ferguson said Schrader charged nearly $47,000 on someone else’s corporate credit card.
Attorney Kris Brown said Schrader, a Reno resident, had a gambling addiction.
“This is one of those cases where someone takes money and intends to pay it back and it’s not until they’re caught that they realize the magnitude of what they’ve done.”
District Judge Tom Gregory said that Schrader’s position of trust with the company called for some punishment.
Schrader was ordered to serve 90 days in jail, three days at a time, while continuing to work.
• A Reno man is denying felony drug charges that could result in two life sentences.
Demariea Antoine Doucet, 27, entered not guilty pleas to charges including trafficking, principal to trafficking and conspiracy to violate the uniform controlled substances act.
Doucet is accused of participating in methamphetamine sales involving up to four ounces methamphetamine transaction.
Prosecutor Matt Johnson sought a trial within 60 days on behalf of the state.
Defense attorney Matthew Ence said he felt the trial would take more than a week.
In arguing for a higher bail, Johnson said Doucet had been released from prison in 2017. He was arrested in 2015 in Reno and sentenced to 12-32 months on a charge of possession of a controlled substance for sale.
Two people arrested in the same case have entered guilty pleas and been sentenced. Susan Hinton, 57, was sentenced to 8-10 years in prison, while Alexis Johnson, 29, received a suspended 2-5-year prison sentence.
Doucet is free on $60,000 bail.
• A Gardnerville man, who got out of prison in May, will likely be heading back, attorneys said on Monday.
Kenton L. Duffy, 61, is facing a parole violation after he was arrested in December. On Monday he received a suspended 19-48-month sentence to start after he serves out the prison sentence.
Duffy admitted to a count of possession of a controlled substance in connection with his Dec. 11, 2020 arrest.