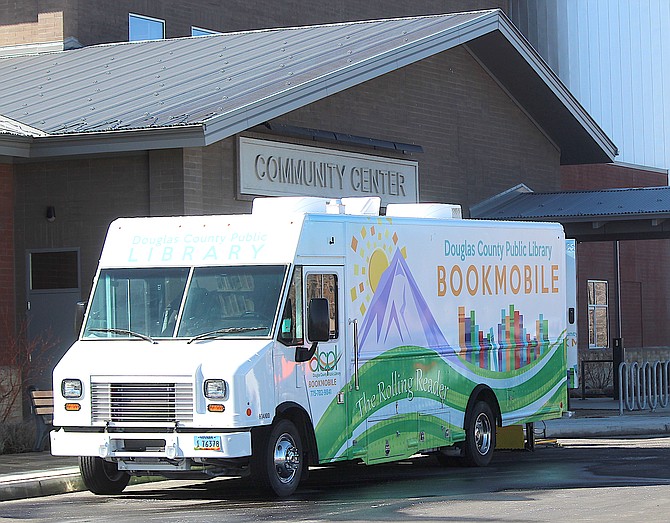 The Bookmobile is at the Douglas County Community & Senior Center on Wednesdays and Fridays.

Library trustees indicated on Tuesday that they’re not interested in spending money on anything that might be perceived as an alternative to fully opening the Douglas County Public Library.

In a 3-1 vote, trustees voted to table a proposal to buy and maintain 39 book lockers to be placed at the Minden and Lake Tahoe branches.

The lockers would allow patrons to pick up books they’ve placed on hold any time of the day or night using an application.

Carson City and Elko County libraries have implemented the lockers to serve customers during the pandemic.

As of Tuesday, the library was holding 300 items for patrons to pick up.

Trustees said they felt the lockers might be a valuable asset at the Lake Tahoe branch, which is only open two days a week.

Trustees also approved paying half of the cost of an investigation into a diversity statement that prompted a protest from the sheriff and an Aug. 8 demonstration in Minden.

The investigation approved in August will cost the library $12,508.43. Risk Management is paying the rest of the $25,016 invoice from Ogletree, Deakins, Nash, Smoak and Stewart.

The investigation found there was no legal or policy violation involved in discussing the statement that referenced #Black Lives Matter.

“Our review of the minutes shows that the board did not stray from the agenda items statement of topics to be considered,” Chief Deputy Attorney General Rosalie Bordelove wrote. “While a specific dollar amount was not listed in the agenda, the use of the word ‘retain’ put the public on notice that approval of the item may involve approval of an expenditure of funds.”

The library reopened for in-person browsing on Feb. 11 after being closed for two months due to a surge in coronavirus cases.