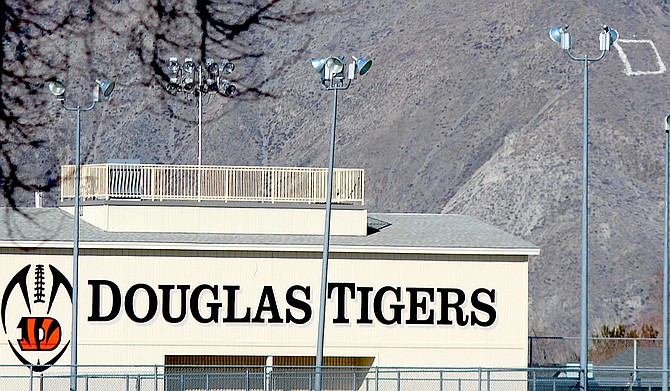 Douglas High School's gym with D-hill in the background on Friday morning.

In a memo to district staff, Lewis said that Carson Valley and Pau-Wa-Lu middle school seventh- and eighth-graders will be returning on March 8.

Sixth-graders will return to their pre-outbreak schedule on Monday.

Only ASPIRE Academy, which meets at the Bently campus of Western Nevada College, remains in the hybrid mode.

Lewis said 171 district personnel and students have been diagnosed with the virus since school reopened in August.

As of Feb. 17, the district had a half-dozen active cases.

Douglas Emergency Management reported nine new cases and a dozen recoveries on Thursday bringing the number of active cases down to 462.

The schools were shut down in March last year due to the coronavirus outbreak. They reopened in August in a hybrid model, so the schools could accommodate social distancing.

Elementary schools with the room have been meeting in-person since the beginning of the year, but Valley high and middle school students were split between in person and distance learning.

On Thursday, vaccinations resumed at the Douglas County Fairgrounds after Carson City Health and Human received a shipment. Vaccine deliveries were delayed by severe weather experienced in the center of the country.

Clinics for a second dose of the vaccine postponed from Feb. 20-21 will be conducted this weekend. Appointments are required to receive a vaccination.

To find an appointment, visit nvcovidfighter.org to find vaccinations from a private pharmacy or go to gethealthycarsoncity.org.

Douglas County has experienced 33 deaths as a result of the virus, according to Carson City Health and Human Services.