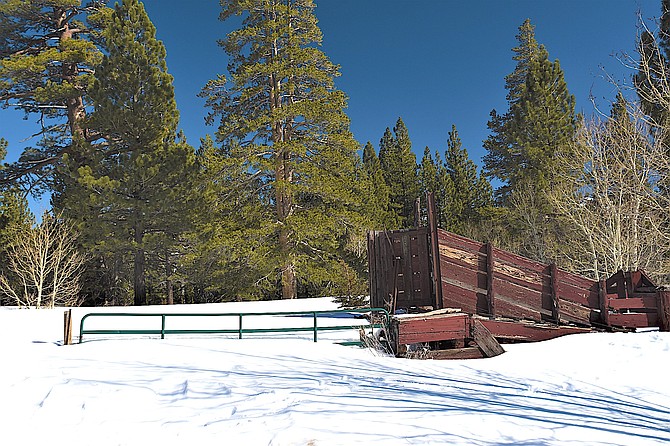 A snowbound old cattle corral in Hope Valley on Tuesday.

Genoa, Nev. — Douglas County sent its MRAP tactical vehicle up to South Lake Tahoe for the standoff that resulted in the arrest of a Santa Cruz man. I can’t tell that 55-year-old Scott Nevin has ever been in trouble in Douglas, though the Santa Cruz folks who were looking for him found tactical vests with Washoe County Sheriff’s patches.

The Board of Examiners is meeting on Beach Club 10 a.m. this morning for the appeal of their $35.1 million valuation. Keep in mind that in Nevada, property owners pay taxes on 35 percent so the basis of their tax bill is $11.025 million. To watch, visit www.douglascountynv.gov and click on Agendas and Minutes.

I’ve yet to hear from the Nevada Highway Patrol on either Monday night’s collision at Riverview and Highway 395 or the fatal collision that claimed Sean Leonard in Bodie Flat. I’ve also yet to learn the identities of the two men who shot each other on La Mirada Court.

Douglas saw six new coronavirus cases and a recovery on Wednesday evening. Vaccination clinics are being rescheduled, including one at the Fairgrounds today, and at the Senior Center or Fairgrounds this weekend.

I got word that Shoe Tree Brewing hopes to open in the Ironwood Center in April. The Carson City brewer has been working to open its Minden location since early last year.

Expect mostly sunny skies and a high near 53 degrees today with a rare still day. It will cool off a little on Saturday but no precipitation is in the forecast through next Wednesday. It might be time to bust out the hoses and do some watering.