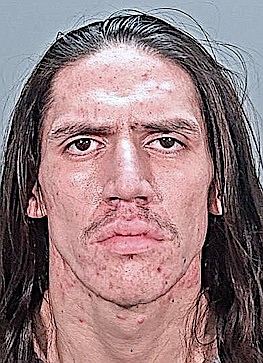 A California parolee faces up to 61 years in prison after he admitted Monday he shot a Douglas County Sheriff’s sergeant in a Dec. 20 traffic stop.

The attempted murder charge carries an enhancement that could double the 2-20-year sentence Berreman is facing. Under Nevada law that sentence must be served consecutively to the underlying sentence.

Berreman was convicted of assault on a peace officer with a deadly weapon in California in 2019 and had absconded from parole when he was spotted in Carson Valley on the evening of Dec. 20.

Deputies were aware he had a warrant out for his arrest and stopped the car he was riding in at Douglas and Gilman avenues.

Driver Kaela Mae Horse-Berreman told a Carson City detective she heard Berreman fire a pistol from the seat next to her.

She told Carson City invesigators she picked up Berreman at the COD Casino in Minden and went to a Gardnerville supermarket to purchase liquor. She spotted the deputy behind her on her way back and at 11:14 p.m. Deputy Justin Fricke pulled over the Jeep at Douglas and Gilman avenues.

Lenz pulled in front of the vehicle backing up Fricke and when he got out, Berreman opened fire. He hit Lenz three times, twice in the chest, and once in the face.

Horse-Berreman said she ducked down behind the driver’s side door to avoid being hit.

Berreman confirmed he was drunk the night of the shooting.

Berreman is being held without bail pending sentencing. He is being represented by attorney Brian Filter.