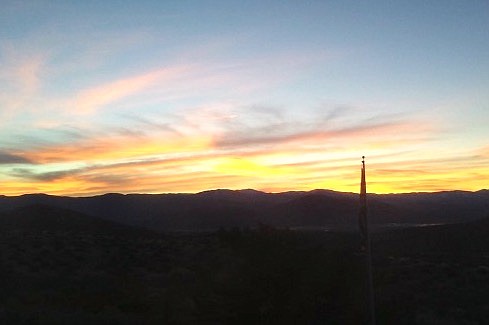 Genoa, Nev. — Deputy Teresa Duffy retired from the Douglas County Sheriff’s Office with a celebration on Sunday. Deputy Duffy wrapped up her career with the MOST team, but has also served as advisor to the Sheriff’s Explorers and will be missed at Trick or Treat Street. The Carson Valley Active 20-30 Club named her citizen of the year in 2016.

This morning Sgt. John Lenz is back on the beat after fully recovering from the Dec. 20 shooting. Alleged shooter Nicholas Berreman is scheduled to be in court today.

Saturday saw enough snow on the roads to send the Nevada Highway Patrol into overdrive. We had a couple of spin-outs in Douglas County, but the real issue was on Interstate 80 where troopers spent the morning waiting on no fewer than eight tow trucks.

Looking at the forecast, it appears that February has done all it’s going to for the weather picture. This morning’s red sky heralds a strong but dry cold front on Wednesday. Expect cooler temperatures and a slight chance of snow on Saturday.

Expect sunny skies and a high temperature of 54 degrees. We’ll see a light breeze out of the southwest this afternoon.