Even virtual kittens have no place in courtroom 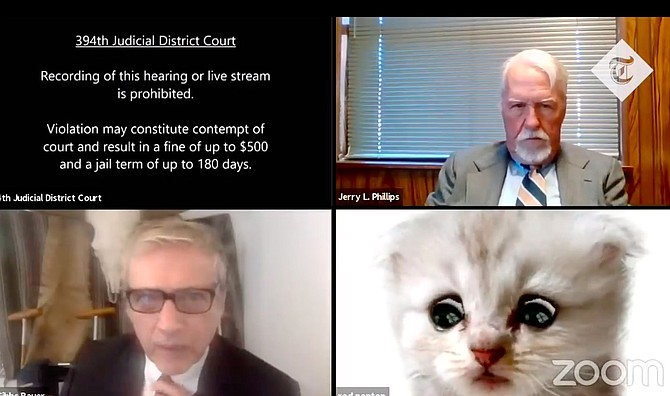 A Texas attorney made national news after his Zoom filter turned his image into a kitten during a virtual court hearing.

Now, a year later, the judges, attorneys, and clients alike, have adjusted to the new reality and requirements when appearing in court. As often as possible, the hearings, and even trials, take place via a video platform rather than in person. That means adapting to new technologies and adopting tools that we previously used for leisurely communication with family and friends for professional use. All these changes require a completely different set of skills if not a new set.

Last week, a Texas County attorney expected to appear for a court hearing on Zoom…well, as himself. Instead, and to the amusement of the legal community and most of the country by the end of the day, he appeared as an adorable kitten because of a digital filter on his computer. A digital filter is a Zoom function that allows to alter one’s appearance. The judge kindly pointed out that the cat filter was on. The attorney, with his kitten mouth vocalizing, admitted that he did not know how to remove it. His panicked kitten eyes darted franticly around the screen, looking for a solution. Unable to fix it, the attorney declared his readiness to proceed with the hearing by stating, somewhat obvious despite the appearance, that he is not a cat!

It took approximately 30 seconds to remove the filter. Surprisingly, the other attorneys who appeared during the hearing managed to remain serious. The judge kindly laughed at the incident and later tweeted the incident with a very helpful advice: “Important Zoom tip: If a child used your computer, before you join a virtual hearing, check the Zoom video options to be sure filters are off.”

The “purr” attorney explained that he was using his secretary’s computer in a remote office and it was
“one of those computer things that happened” due to not being as adept on a computer as “the younger crowd.”

All laughs aside, short of being unprepared or surprised at trial, appearing unprofessional and laughable is every attorney’s worst nightmare. Similarly, the parties appearing in front of the judge and pleading their case should also ensure that they present with the respect due the court.

Preferably, adults and children should have separate devices, with a designated computer for professional use. Alternatively, every person should have their own account and prior to a video call, one should verify that a correct account is being used.

Most video applications also allow the previewing of one’s video feed prior to joining the video meeting. This option should be enabled and used not only to verify that the correct account is being used and that no filters are applied, but also to check the background, virtual or real, for any unintended visual effects.

An ordinary court proceeding can take an unexpected and hilarious turn if not enough attention is paid to the technical requirements. It should be avoided unless you embarrassingly want to go viral.