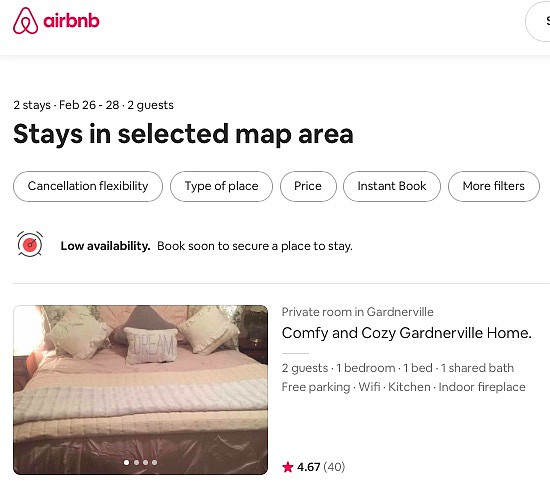 An Air BnB listing for a Gardnerville rental.

Douglas County has suspended issuing new vacation home rental permits in the Tahoe Township until commissioners can make changes to the ordinance.

After a lengthy, and at some points heated, discussion on a regulatory framework for VHRs, the commission ultimately decided to punt the decision down the road.

Part of the recommendations by the county manager and a VHR task force included a cap of 725 VHR permits in Tahoe, which would account for about 13 percent of home stock. As of March 2020, there were 533 active permits.

There was also discussion of extending VHRs into the rest of the county, or at least the East Fork Township, where VHRs are currently banned.

Commissioner Danny Tarkanian led most of the discussion, and while he said there were some recommendations he agreed with, he ultimately wanted to hold the issuance of new permits until certain issues were addressed.

One of the main sticking points for him were permits that had been issued to homes in general improvement districts and homeowners associations where commercial activity was banned, as well as within the home’s covenants, conditions, and restrictions.

Another issue was possible buffer zones around VHRs so they aren’t clustered in certain neighborhoods.

He ultimately backed off on the second part, but wants it brought up again in the future.

The commissioners unanimously approved giving direction to staff to draft a resolution suspending new VHR permits until further notice that will presented at a future meeting.

In the meantime, staff will continue massaging VHR ordinance changes.

Lake Tahoe residents on the county's VHR task force said they felt the ordinance should be extended to East Fork Township, where it is currently illegal.

It has been 15 years since the Tahoe Regional Planning Agency asked local governments to enact regulations dealing with vacation home rentals.

Prior to that time the agency had regulations that required property owners to promise not to use their home as a tourist accommodation for more than two weeks, four times a year, according to a 2003 Tahoe Daily Tribune story.

Homes that were built prior to the formation of the TRPA weren’t affected by the rule and the agency hadn’t enforced it in years.

However issues came to a head when an attorney for the Zephyr Heights General Improvement District called out TRPA staff for ignoring 17 complaints about vacation rentals at a governing board meeting.

That prompted the TRPA to ask local governments around the Lake, including Douglas County, to implement ordinances governing the rentals.

In 2005, Douglas County approved the ordinance, which only affected Tahoe Township. In East Fork Township, which includes Carson Valley and the south county, vacation rentals are not allowed. The county has a bed and breakfast permit that requires the property owner to be there during the rental.

Three years later, AirBnB was founded which increased the demand for vacation rentals in resort locations such as Lake Tahoe.

Kurt Hildebrand of The Record-Courier contributed to this story.