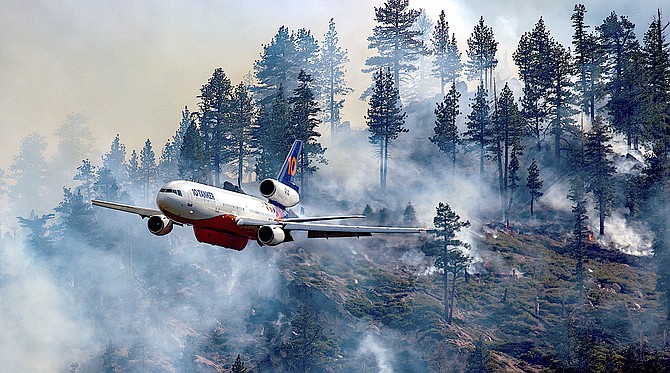 A jet fire tanker flies over the Tamarack fire in July.
JT Humphrey | Special to The R-C

Educators, day care workers were among the first to receive coronavirus vaccinations as the rollout began with the start of 2021.

Work along Foothill power lines started at the beginning of the year as NV Energy funded firefighting crews to clear brush from the bottom of poles in an effort to reduce the chance of fires.

The first and last blizzard of 2021 occurred Jan. 27-28 and brought 9 inches of snow to Genoa and four feet to the Sierra. The storm postponed the annual Eagles & Ag tur.

The Legislature wasn’t in session for very long before news of proposed $1.2 million in cuts to the China Spring Youth Camp budget came to light.

A drive-through Valentine’s Day lunch brought seniors to the Douglas County Community & Senior Center. The center remained closed by the coronavirus into June.

Sheriff’s Sgt. John Lenz returned to work after being shot in an early-morning exchange of gunfire on Dec. 20. Shooter Nicholas Berreman admitted responsibility for the shooting the following week.

Gardnerville resident Sean Leonard was killed while turning into Bodie Flat from Highway 395 on Feb. 23 after a semitruck failed to stop and ran into him from behind.

Douglas High School students were greeted by parents after the school opened to full-time, in-person instruction on March 9.

Ruhenstroth resident Heather Jackson was appointed to fill the school board seat vacated by Tom Moore.

Carson Valley native Shannon Hickey volunteered for many things dealing with the history of the place she’d spent her entire life. She died March 14.

March was another month that saw a lack of significant storms to help bring the Sierra back from a very dry 2020.

A new judicial and law enforcement center would cost more than $56 million with all the trimmings. Rather than trying the whole thing the county is looking at a $$29.5 million proposal.

The man who shot Sheriff’s Sgt. John Lenz on Dec. 20, 2020, was sentenced to 61 years in prison. Nicholas Berreman will have to serve two-dozen years before he’s eligible for parole.

Douglas High School Football coach Ernie Monfiletto announced he was retiring after 25 years at the school.

The East Fork Gallery announced it was moving across Main Street to its new home in the Old Town Center after 21 years in The Record-Courier Center.

Two reported intruders were shot in two early morning calls in a row. A man was killed early May 4 after he pounded on the door of a Topaz Ranch Estates home. On May 5, a man who ran into a Gardnerville Ranchos home and backed the resident into a corner was shot in the shoulder.

The Douglas County Senior Center reopened to the public on May 10, three days after its last drive-through meal celebrating Mother’s Day.

Foothill resident and California trauma surgeon Fred J. Simon was the first person to announce he was running for the Republican nomination for Nevada governor.

Douglas County school officials canceled their May 18 meeting after a man allegedly made a threat against the school board over a mask mandate.

The Esmeralda Farmers Market in downtown Minden opened for its 19th year sans masks. It was the first market of the season.

In an admitted longshot, Carson Valley resident Jonathan Ruppel started an effort that wound up successfully bringing July 4 fireworks back to Stateline.

Fewer than a tenth of the people living in the Carson River Watershed could name the actual river in a survey.

The East Fork Fire Protection District celebrated its 40th anniversary on a dreary Saturday in Sunridge.

Genoans rallied to defend the town’s nine original streetlights after NV Energy officials said they would have to come down. The lights were purchased with money from the original Candy Dance in 1919.

Gov. Steve Sisolak singed a bill aimed at silencing the Minden siren during a ceremony at Stewart Indian School. In response, the chairman of the Washoe Tribe and the Minden Town manager agreed to move the siren time from 6 p.m. to 5 p.m.

Months after state officials sought to cut the budget for China Spring Youth Camp, the camp decided to close the boys side due to staffing issues directly related to the funding debate.

The four-day Carson Valley Days celebration returned after being trimmed down by the coronavirus outbreak the prior year.

A 285-acre fire threatened Jacks Valley Elementary School and around 1,000 homes on June 9 when it was driven by high winds toward Indian Hills.

Two Douglas School district registrars with a combined 61 years of experience retired in June, joining nearly 40 of their co-workers.

The new Minden McDonalds opened on June 25 after 39 years at its former location.

July opened with the first big fire of the year where downed logs contributed to unhealthy air levels. The 1,136-acre East Fork Fire appeared to have started from a lighting storm that dumped rain in Gardnerville.

A 6.0 magnitude earthquake sent rocks down onto Highway 395 through Walker Canyon and knocked bottles off shelves in Walker.

A fundraiser was underway for the family of Hadyn Miguel who died in a fall from a cliff near Lost Lakes over the Fourth of July weekend.

A federal judge issued a restraining order against the county from enforcing parts of its new vacation home rental ordinance.

A fire that had been smoldering in the Sierra above Markleeville since the Fourth of July exploded into flames on July 15. The Tamarack Fire burned a score of homes from the Sierra to the Pine Nuts resulting in the closure of Highway 395 and evacuation of Topaz Ranch Estates.

Douglas County Library Minden Branch Supervisor Julia Brown was named interim Librarian while the board of trustees searches for a new director after the departure of Amy Dodson.

Jacks Valley native Krysta Palmer was welcomed home after winning the bronze medal in diving at the Tokyo Olympics.

A lack of inventory, low interest rates and eager buyers sent home pries into the stratospheric rate of $326 per square foot in August.

A month after the Tamarack Fire raged through, a new fire started introducing itself to Carson Valley residents with smoky skies. The Caldor Fire was 55,000 acres on Aug. 18 and showing no signs of slowing down.

Increased construction costs could triple the price of rebuilding homes lost in the Tamarack Fire.

The Douglas County Community & Senior Center closed to take evacuees from Lake Tahoe a week before the Caldor Fire made its big push into the Tahoe Basin.

A man who admitted to brutally raping a woman to death in a tent at the base of an Indian Hills shopping center was sentenced to life without parole. Kenneth Allen Hayes, 66, will die in prison.

South Lake Tahoe and Stateline were evacuated ahead of the Caldor Fire, the first time Douglas residents were subjected to a mandatory evacuation in modern history. In Nevada, only the governor can order an evacuation, but he delegated that power to the county in his emergency declaration.

Foothill residents waited to learn whether they would be evacuated as the Caldor Fire burned to within 3-4 miles southwest of the Douglas County line.

The Hard Rock Casino at Stateline housed the Caldor Fire’s incident command as all four casinos closed their gaming operations and provided shelter for first responders.

The Douglas County Community & Senior Center reopened after being closed two weeks to serve as an evacuation center. At it’s peak, it housed 200 evacuees.

NV Energy announced the first possible public safety outage as forecasters issued a red flag warning for the weekend of Sept. 18-19. Power would be shut off to 35 Jacks Valley customers 10 days later

Federal and local law enforcement raided a marijuana grow behind Bodie Flat in the Pine Nuts, seizing a reported 62 tons of marijuana from the 160 green houses on 22 acres of Washoe Allotment land on Sept. 20.

After being shut down by the coronavirus outbreak in 2020, Genoa finally got to celebrate the 100th Candy Dance as tens of thousands of visitors swamped the tiny town over the last weekend in September.

Deputy Tyree Holdridge was raised on a ranch in Carson Valley and was voted best first responder in The Record-Courier’s annual Besst of Carson Valley awards.

After debating the fate of the old Gardnerville laundry for more than two years, the town decided to tackle another structure that has been empty for more than a decades, the former Old Town Antiques.

Carson Valley Medical Center conducted a groundbreaking on the $29.3 million expansion, which is expected to open to patients during the first quarter of 2024.

A volunteer group raised more than $80,000 for Douglas County victims of the Tamarack Fire. The Tamarack Turnaround was Sept. 19 at the Carson Valley Country Club.

An atmospheric river brought 3.05 inches to rain to Minden and dropped an estimated 24 billion gallons into Lake Tahoe, making it the second wettest October on record.

Former Douglas County Historical Society President Dennis Little was recognized as 2021 Citizen of the Year by the Carson Valley Chamber of Commerce.

Conservation easements on nearly 1,800 acres of historic ranch properties could be done by summer 2022, federal officials said. The easements on the Van Sickle and old Dangberg properties have been in the works for a couple of years.

The man who murdered Gardnerville Ranchos residents Connie Koontz and Sophia Renkin in their homes admitted the shootings in exchange for four life terms.

After two town hall meetings on critical race theory, Douglas County School Board trustees said they were satisfied the theory wasn’t being taught in the schools.

An Oregon parolee’s attempt to escape Douglas County Sheriff’s deputies resulted in the death of his passenger after he collided with another vehicle while fleeing.

The first full school year during the coronavirus outbreak resulted in a dip in Douglas County’s graduation rate to 84.53 percent, down from 88.91 percent the year before.

The U.S. Forest Service cleared the path of the extension of the Jacks Valley Loop Trails that includes 8.1 miles of new trail and the removal of 4.65 miles of user-created trails.

More than 400 Turkey Trotters turned out on Thanksgiving morning in Minden to raise money for the Carson Valley Community Food Closet.

A woman who was drunk when she slammed into the back of another vehicle, killing a passenger, received 10 years to life in prison. Joan Kathryn Wenger, 67, had a .291 blood alcohol content and an open half bottle of whiskey when the collision occurred.

Big crowds turned out at events in Carson Valley’s three towns, with hundreds packing Heritage Park for fireworks, Minden for the gazebo lighting and Genoa for caroling and breakfast with Santa. Parade of Lights topped off the celebration.

An indoor farming technology company that plans to move to Douglas County was approved for $1 million in tax abatements. Local Bounti Corp. is required to employ a certain number of people in Minden to receive the benefit.

Marilyn Malkmus’ name was synonymous with Project Santa Claus for nearly 20 years. The 30-year Gardnerville resident was remembered for her good works.

A mid-December snowstorm in Carson Valley brought rough weather and served up a nice shot of moisture.

The search for a new East Fork Fire deputy chief of operations will take a six-month break while the district examines how to improve the process.