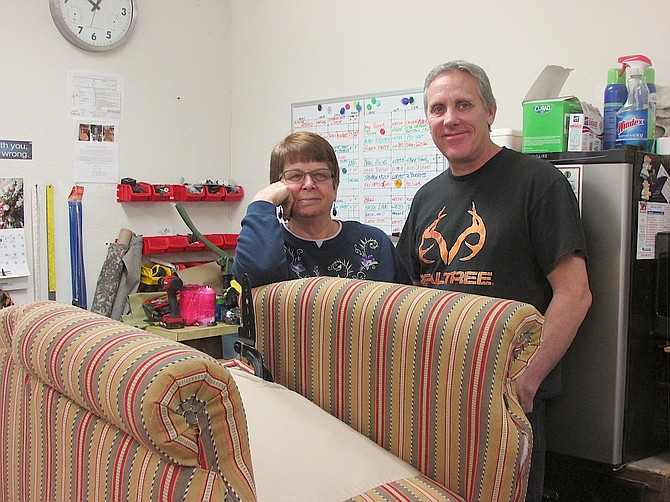 Tweed’s Upholstery owner Linda Bell poses with a project in progress at the shop.
Photo by Sarah Drinkwine.

After 55 years in business in the Carson Valley, Gardnerville resident and owner of Tweed’s Upholstery, Linda Bell is handing over the needle and retiring Dec. 20.

“It’s been a real ride, I’ve enjoyed every minute of it,” said Bell. “I enjoy my customers and my work. It’s going to be hard to let go and hand over a baby you’ve raised, but the hands are wearing down and it’s time to pass on the needle.”

Tim and Luz Bland who also own and operate the Sierra Motel, in Gardnerville will be taking over the upholstery shop.

“It’s going to be a surprise to a few, but it will be a good surprise,” said Bell. “They’re [customers] in good hands and we’re trying to reassure everyone that things will continue and the same services will be provided.”

Tim and Bell first met when Tim was working on his boat and needed help sewing his seats. He found Tweed’s Upholstery and the rest is history as they built a friendship and partnership.

“I kept coming to her for help and one day she just said ‘I’m retiring, do it yourself!’ Those were her exact words,” said Tim. “When I said I didn’t know how to sew, she sat me down right there and taught me. Over time, we started talking about what would happen to the shop after she retired.”

The Blands bought the shop in October, since then they have been getting affairs in order and transitioning to the change.

“I’m just trying to fill her sizable shoes,” said Tim. “Nothing else is going to change.”

Bell opened Tweed’s Upholstery in 2000 on Industrial Way in Gardnerville. Before that, she worked out of her living room and garage.

“People would drop stuff off right in front of my garage at that time, or my living room always had some project in there,” said Bell.

Bell said she learned to sew from her grandmother and mother and picked up upholstery through a friend who had a shop in Bishop.

Bell recalled her first projects were a hide away bed and seats from an old pick-up when she was 18 years old. Since, she has taken on many projects from auto to furniture, including 88 chair pads her team reupholstered in one day.

“You name it, we do it,” said Bell. “I’ve done everything from a helicopter to a baby buggy.”

Bell said the creativity in upholstery is endless.

“You can tear the same thing apart a hundred times, same style chair or couch, but there’s always something different about it and a way to be creative,” said Bell. “To take something in that looks like the dickens then turn it around into something beautiful is my favorite part of any project and seeing people’s faces.”

Bell plans to take up painting and to simply transition into retirement, but will be only a thread away from Tweeds Upholstery.

Tweed’s Upholstery is located at 1424 Industrial Way in Gardnerville Suite D. The services they provide include sewing, upholster of furniture, both indoor and outdoor, automobile interior and more. Call 782-5812 for more information