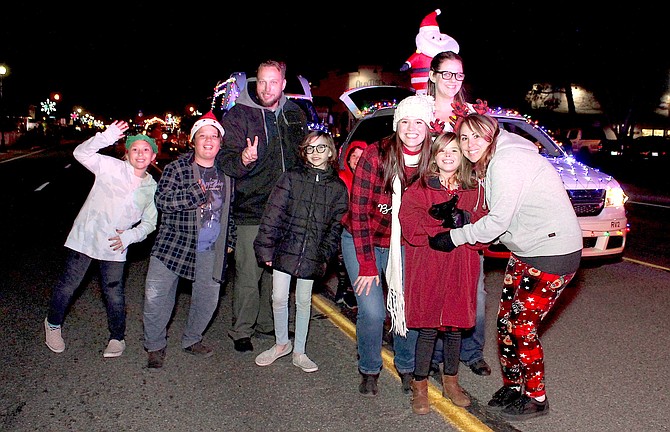 Participants in the 2021 Parade of Lights pause for a photo in Gardnerville.
Photo by Kurt Hildebrand.

Carson Valley’s Christmas celebrations are in the history books and by all accounts they were wildly popular.

Opening the month of December, Gardnerville had one of its best fireworks shows since they began.

Both Heritage and Minden parks were packed for their Christmas lightings.

On Saturday morning, 441 people turned out for Genoa’s Breakfast with Santa, more than actually live within the boundaries of Nevada’s oldest town.

With no disrespect to the Carson Valley Active 20-30 Club, we would say that the turnout for Saturday’s Parade of Lights rivaled that of some Carson Valley Days.

Certainly, the fact that it was relatively warm on all three nights, didn’t hurt the turnout.

And that isn’t the end of it by any stretch of the imagination.

The Carson Valley Pops Orchestra essentially ran out of tickets for their winter concert two days after starting to offer them.

We haven’t heard from any of the other concerts, but we expect that most are experiencing similar popularity.

The Share Your Holiday Food Drive isn’t really about the entertainment, but we expect there to be a considerable crowd on Friday.

We attribute the big turnouts in part to the general enthusiasm people have developed for attending events after the 2020 coronavirus lockdowns.

Like so many other things, there’s nothing like a shortage to sharpen people’s desire for a product, whether that’s toilet paper, gasoline or an event.

After the Thanksgiving 2020 coronavirus surge, all the Christmas events were canceled just three days before they were scheduled to start. That didn’t stop people who’d already built their Parade of Lights floats from holding their own parade along Minden and Gardnerville’s back streets.

Even that quickly organized event was pretty well attended.

Maybe one of the takeaways from the coronavirus lockdown is to appreciate the things we have while we have them.

Much has been made about younger generations seeking experiences over things, and there’s some wisdom there for all of us.

If going to a fireworks show or a lights parade or a concert brings you joy, then you should seize that opportunity.

There’s more than enough misery in the world. Rather than swimming in it, find paths to peace in this Season of Peace. Take a moment and appreciate those small miracles that remind us our lives are precious.