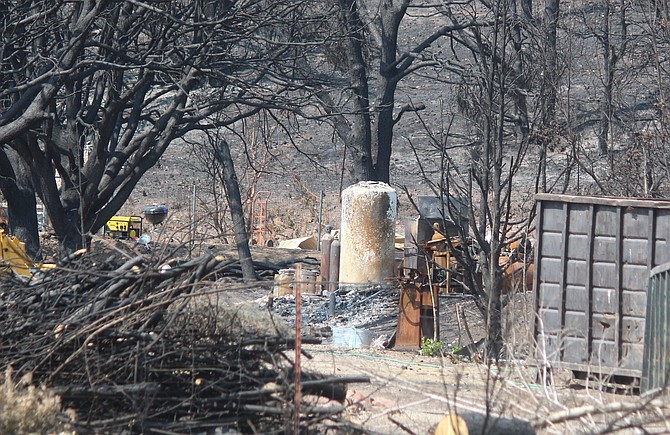 Work is ongoing at a property along Highway 395 to recover after the Tamarack Fire claimed homes.

Residents of the Holbrook area, who lost their homes may find of rebuilding could be at least triple, thanks in part to increased construction costs.

The Record-Courier looked up the square footage and replacement costs for the homes listed as destroyed in the Tamarack Fire on the Douglas County Assessor’s Office.

According to the site, the combined structures consisted of 21,206 square feet with a listed replacement cost of $2.19 million.

At $326 a square foot reported earlier this month, rebuilding will cost homeowners $6.9 million at least.

At least one person who lost a home said his insurer estimated it would be 2-4 years before he could rebuild.

With wildfires burning homes down in surrounding areas, there will be significant competition for builders and materials.

A half-dozen Douglas residents were at the Wine Walk on Thursday to let people know about the Tamarack Turnaround Fire Relief Fundraiser to support those who lost their homes.

The event is 11 a.m. Sept. 19 at the Carson Valley Country Club, where they’ll be serving pasta from noon to 3 p.m. There will be live dancing on the patio after lunch. Tickets are $25 in advance or $30 at the door.

The group is raising money for those displaced by the fire.

Organizer Ridgely Elisabeth Eastman said there is no overhead, and all the proceeds will be split evenly among the victims.

“I was upset and wanted to help the fire victims, so we decided get involved and wanted to do a fundraiser,” Hoppe said. “We’re just a bunch of caring people.”

Hoppe spoke at the Chamber on Wednesday about the effort.

The Partnership of Community Resources is handling the money.

“We have a lot of people who want to jump on board and support the effort and help the fire victims,” Eastman said.

Douglas County commissioners voted Thursday to waive building fees for residents who lost their homes in the Tamarack Fire.

Community Development Director Tom Dallaire said the county evaluated the damage shortly after it was safe to enter the area.

He said one challenge was trying to tell where all the outbuildings had been in trying to establish the $100,000 estimate for the fees.

Any structure over 200 square feet requires a building permit.

He said two of the homes had damage that wouldn’t prevent their owners from living there, though he didn’t know whether they would have power.

“The homes that burned, burned completely,” he said of the other 11.

Commissioner Mark Gardner, who sought the resolution, asked if the two years was sufficient.

Dallaire said the deadline was to apply for the permit. Generally, building permits are good for two years.

“If there are two or three homes left to be built we could bring the resolution back for renewal,” Dallaire explained.

He said the fire consumed 14,873 acres in Nevada and 53,823 acres in California. He said that 185 Alpine and Douglas residents sheltered at the Douglas County Community Center for a week and 235 south county residents were sheltered at Smith Valley High School for six days.

He said the total estimated cost to fight the fire has reached $30 million, making it the most expensive fire in Douglas County history and the second largest.

On Thursday, the Nevada Division of Insurance urged homeowners to review their coverage in ensure that it is sufficient to replace their loss.

“Consumers should consider how their home insurance policy is affected by the increase of building materials and construction costs which have increased significantly this past year,” Insurance Commissioner Barbara Richardson. “A home insurance policy pays for the cost to rebuild or repair a structure. With the price of materials such as lumber and steel increasing, consumers are encouraged to meet with their insurance agent or company to make any necessary adjustments to ensure their assets are protected adequately, and that rising construction costs have not left them underinsured.”