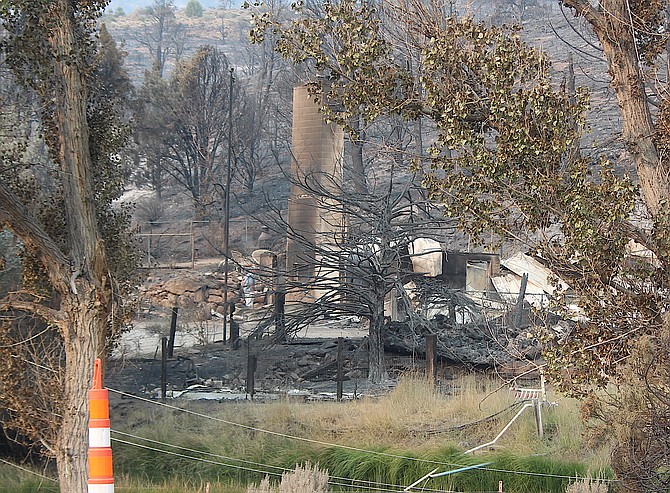 One of the homes destroyed along Highway 395.
Photo by Kurt Hildebrand.

We read your July 29 article, "Family's Loss Extended over 15 miles in 5 Days," with interest. The Addeo-Johansen family were going to be our new neighbors.

We are one of four homes burned along with the Addeo-Johansen home-to-be, when the Tamarack fire reached 395. Three of those homes, including ours, are a total loss and the fourth, belonging to a young couple who recently had a baby, suffered severe damage.

This fire did not need to happen. It ignited on July 4 along with several other lightning strikes, but USFS officials decided to only monitor. On July 10 the Humboldt-Toiyabe National Forest even posted a Facebook video of a flyover of the site. In their words;

"The #TamarackFire burning in the Mokelumne wilderness was ignited July 4 from lightning. The tactical management decision is not to insert fire crews due to safety concerns, however, this is not an unresponsive approach. Smoke might be visible to Pacific Crest Trail hikers but the quarter-acre fire is surrounded by granite rocks, a small lake and sparse fuels. Fire poses no threat to the public, infrastructure or resource values."

On July 16, the fire exploded to 6,000 acres. On July 21 we evacuated. My husband and I are now among the ever-growing ranks of fire survivors, homeless and facing an uncertain future.

For 12 days the USFS watched that fire. I know they dealt with other lightning strikes close to homes and "values." I understand fire fighting resources were limited. But it's kind of a slap in the face that officials sat on this thing for nearly two weeks, when they had jumped right on the East Fork fire just a few miles east. They had East Fork 65% contained by July 6 and stopped it at 1,136 acres. The Stanislaus National Forest contained the even more remote Henry fire at 1,320 acres.

In 12 days’ time, how did the USFS not address the fledgling Tamarack fire with equal fervor? That incalculably poor decision resulted in almost 70,000 acres of forest and habitat destroyed and the loss of multiple structures and homes. It nearly erased Markleeville, saved only by the heroic efforts of firefighters. And the fallout is still devastating the lives of those of us caught in the fire's path.

We never imagined a fire 15 miles away would chew its way over the mountains to upend our lives. It is bitter to think how a hand crew and some helicopter buckets of water could have changed it all. We should be in our little house right now, enjoying our home of 13 years, our garden and tiny pastures, our pond and our trees — our ecosystem. I'm 59 and my husband is 75: we planned to stay here until we die. But it's gone. Everything we had is gone.

We have temporary haven with friends, along with our dogs, cats, chickens, four sheep and other stuff we saved. Unlike many, we had time to pick and choose some precious things. We do not blame firefighters; they were heroes battling a fire that for days proved nearly undefeatable. We thank God for the kindness of friends and friendly strangers.

But now we slog our way through the insurance process and pray we can rebuild. Our home and our good neighbors will never be the same. All thanks to a fire that did not need to happen. Tamarack may be small fry compared to other fires and losses. But for us it is our whole world.

Will we learn from history?

During our Revolutionary War the number of people supportive of our goal to throw off the chains of despotism numbered in the area of 20 percent of the population, and yet, those few, those honored, those patriots swore their lives, their fortunes, and their sacred honor in pursuit of that goal.

In the Civil War, patriots who fought to ensure that the government of the People, by the People, and for the People will not perish from the Earth. They offered their lives, their fortunes, and their sacred honor.

In World War II, our nation once again gained the resolve to defend against the tyranny of the Axis Powers, Germany, Japan, and Italy. We fought from England in the air and from the ships at Normandy, we fought from land gained through the offerings of the troops who gave their lives to secure footholds in the Pacific to make a steppingstones toward Japan. Lives, fortunes, sacred honor? They gave!

But subsequent to those two wars it seems that our reason for being a representative republic gradually faded away as we prosecuted the war in Korea. Why were we there? Some would say that it was to prevent the Domino Theory from coming to pass; the toppling of one nation after another to advance Communism. In reality, we fought, not for our Republic, not to protect American citizens, not to prevent the Domino Theory from coming to pass, but to ensure that the corrupt “Republican” government of South Korea would stay in place in the hopes of their becoming a democracy. Could those people in South Korea have the drive to offer their lives, their fortunes, and their sacred honor?

Vietnam was the consummate effort of our government to again attempt to create a “democracy” for the citizens of South Vietnam, who had no idea of what a “democracy” was. And that effort cost the lives of over 59,000 Americans. That war concluded with an epic picture of a helicopter removing people from the American embassy in Saigon and a tank crashing the gates. Again one would ask, were their citizens ready to offer their lives, their fortunes, and their sacred honor?

Today, the pictures of the chaos in Kabul was reminiscent of the evacuation of Saigon. One could believe that there was a common thread in the performance of the United States government… nation creation. It failed in Korea, it failed in Saigon, and it again failed in Kabul. When will this country come to the realization that a country will not accept a new form of government until the PEOPLE care enough for their country who are willing to sacrifice their lives, their fortunes, and their sacred honor for that cause?

History has taught us, time and again, that efforts to give to citizens of another country, well before they are ready, a form of government that frees them from the chains of despotism. Are they ready to pledge their lives, their fortunes, and their sacred honor in support of the dream? Are we to ignore the lessons history has revealed to us. If so, we are condemned to relearn them yet again at a very dear cost.

Douglas County residents have done it again. Because of you, St. Gall’s Annual Rummage Sale was a huge success. Thank you to everyone who donated items and thank you to all the shoppers who came on Aug. 6 and 7 to participate in this yearly event. We are so grateful to have such a supportive, amazing community.

A very special thank you to Katy Weber who coordinated the event. And, of course, thank you to all the department heads; to those who picked up donated furniture; and to ALL our volunteers who spent hours sorting, cleaning, and displaying the items received. We could not have done this without you.

In addition, thank you to everyone at The Record-Courier: Editor Kurt Hildebrand, who does an incredible job keeping the community up-to-date and informed about local events; Christine Ostler who handled our advertising requests; and to the R-C “staff writer” who wrote an amazing article about the “upcoming” Rummage Sale event. You are an outstanding group of people and greatly appreciated.

Thank you also to Duane Hayward and Geoffery McAlpin at the COD Casino for allowing us to advertise on the COD marque, and to Nita Summers, Gardnerville property owner, and to Woodett’s Diner for allowing us to post banners on your respective properties.

In addition to The Record Courier, St. Gall has its own media outlets coordinated by three astounding people – John and Wendy Derrig and Rita Hill. This core team did a remarkable job placing Rummage Sale information in the church bulletin, the St. Gall website as well as the St. Gall Facebook page.

Finally, thank you to everyone in our St. Gall family who actively supported our efforts by providing food, water, and various supplies to the volunteers during the five weeks of preparation.

You are what makes Douglas County such a great place to live.

The return of the swamp

Labels to be feared

Her “birth control” clinics turned into abortion mills. Her life’s work, activism and radical remedy to purportedly somehow better life by preventing life was flawed from the beginning. Her influence relieved women of their conscience and personal responsibility to exercise choice before it became a child.

Liberal, progressive and socialist may be tired old lines but still very much alive today... unlike those innocent babies... and accurate labels admittedly to be feared.