Smoke forecasting not an exact science 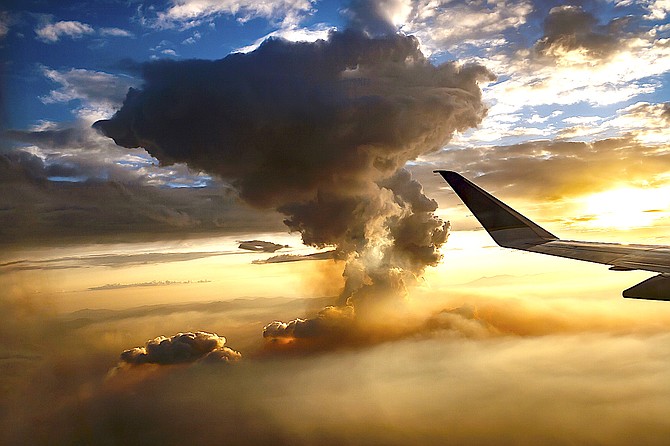 Minden photographer Jay Aldrich caught this photo of the Tamarack Fire from a flight into Reno on Tuesday.

Last weekend, air quality in Gardnerville dropped to hazardous levels as a result of the Tamarack Fire burning in Alpine County, hitting nearly 500 on the air quality index.

Most of the smoke in Western Nevada isn’t generated by local wildfires.

National Weather Service Meteorologist Chris Smallcomb said that in the last 5-10 years predicting where smoke will go has advanced significantly.

“Smoke forecasting is not something that’s taught in meteorology school,” he said. “It’s something you learn in the weather service.”

Most of the initial work toward smoke prediction came from predicting areas affected by hazardous material spills.

“We parlayed that experience to predict where smoke plumes go,” Smallcomb said.

He emphasized that forecasters just say where the smoke may go.

“The health impact is not our lane,” he said.

“As dangerous as thick smoke is, it does cool high temperatures slightly and doesn’t seem to slow the heat escaping into space overnight, unlike cloud cover.”

He said 2020 was a huge year for smoke in Western Nevada.

The smoke was so thick last September that Carson Valley schools had to close in-person learning due to hazardous air quality a few weeks after opening the schools after the coronavirus lockdown.

Smallcomb said schools had to bring air from outside to reduce the spread of the coronavirus, but that brought smoky air into classrooms.

While the winds are a factor in where the smoke is going to go, so is atmospheric stability.

He said that air rising due to heat is key to instability.

“When the air is stable it falls back down,” he said. “When the air mass is stable, it traps the smoke near the ground and in valleys. That happens in early morning hours.”

He said as the day progresses, smoke begins to rise.

“You see the smoke lofting higher and higher,” he said. “Watching toward Portola, you see all of that going on with a pretty impressive smoke plume.”

Smallcomb used July 2 video of the East Fork Fire that burned July 1-6 as an illustration.

“Around 9 a.m. you see the smoke is getting a little bit higher as the unstable atmosphere is starting to develop,” he said. About 10:45 a.m. the plume is going straight up, but not really going anywhere because there’s not a lot of wind.”

“It was generating its own cloud called a pyro cumulous,” he said.

“One of the limitations of smoke models is dealing with thunderstorms,” he said referring to the American Fire smoke tsunami in 2013 spilling into the Truckee Meadows.

“They’re very chaotic,” he said. “We call them drunk thunderstorms. They are all over the place, and they interact with fire in determining where that smoke is going to go.”

The prevailing Washoe Zephyr generally contributes to Western Nevada by cooling it down, but it also brings in smoke from fires in the Sierra.

Once smoke is trapped in the valleys it tends to feed the inversion until a major wind event arrives.

Fire officials hope to have the Tamarack Fire contained by Aug. 31, but warm dry conditions are likely to persist until at least fall, meaning smoke from wildfires will occasionally be casting a pall over Carson Valley over the next four months.