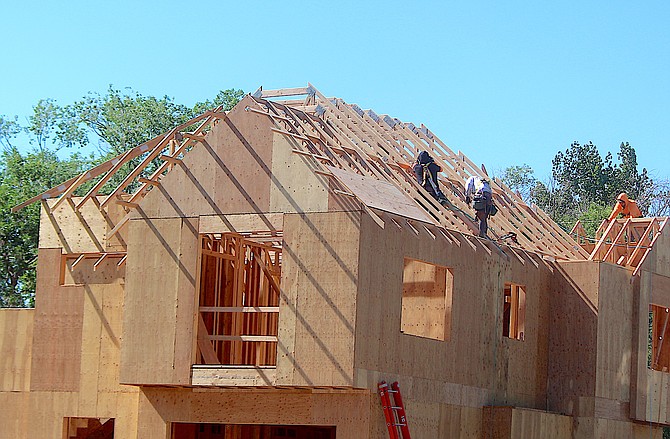 A home under construction in old Minden on Thursday.
Photo by Kurt Hildebrand.

A lack of inventory, low interest rates and eager buyers have sent Douglas County home prices into the stratosphere.

There are only 81 homes in East Fork Township that are available to sale as the housing market continues to glow white hot.

And with homes only staying on the market for around a week, those are likely to sell fast.

Nevada Board of Realtors President Brad Spires said strong demand in the housing market and a lack of inventory are driving prices up.

He said that the median price per square foot was $326.

“During 2010 that was under $100, so that number per square foot is incredible,” he said. “This is a basic supply and demand story. When there’s no inventory, the price goes up.

Because construction costs have increased, even the new homes coming online now are running at higher rates.

Spires said it’s unlikely Douglas will see the market cool off very soon. Home sellers are getting 102 percent of their asking price now.

“We are going to continue to have what we have with people bidding prices up,” he said.

There are instances where residents who are sitting on significant equity in their property are selling.

“There are 54 homes on the market over $1 million,” he said. “Some of those are people looking at the market and thinking maybe it’s time for us to downsize, or to buy a motorhome and travel for three years. With numbers escalating the way they have, a lot of people are testing the market.”

“The higher end market that was dormant for so long has just gone through the roof,” he said.

On the other end of the spectrum, on Friday morning there were only three active listings under $400,000.

“That’s a little problematic for new folks coming into the Valley, first responders and teachers,” he said. “Interest rates are still low enough to give them the buying power they need where they can still buy a home.”

The average sales price for a home in Carson Valley hit a record $658,947 during the second quarter of 2021.

According to figures released Wednesday by the Douglas County Assessor’s Office, the median home sales price was $525,000 during the quarter, which also appears to be a record.

In all, 275 homes were sold during the quarter, the second highest number in the last 16 years. Only second quarter 2017 saw more home sales. Only 198 homes sold in the first quarter, but that number rose to 275 sales in Carson Valley in the second quarter bringing the total to 473 in just the first half of 2021.

That’s exactly on pace to equal the total home sales of 946 in 2020 in Carson Valley, despite the huge jump in average price.

Construction on projects in Minden has continued, with homes going up along the new Santa Anita Boulevard that has been extended from highways 395 and 88, and along Buckeye Road.

On Tuesday, Douglas County planning commissioners are scheduled to discuss removing a provision from the county’s growth ordinance that allows building permits to carry over from one year to the next.

As of last month, there are still 581 permits in the current project pool and 1,452 permits available for individuals. No more than 10 percent of the project pool permits would be allowed to be issued in a year.

Under the proposal, commissioners would review Census data to determine if a 2-percent growth cap should be reviewed to adjust it based on demographic data.

Any change to the ordinance will have to be ratified by voters.

Most of the concerns about growth in the county are centered in Carson Valley.

Planning commissioners are scheduled to discuss revision of the county’s vacation home rental ordinance prompted by a federal lawsuit.

Skyrocketing home prices were not limited to Carson Valley during the second quarter of 2021.

That’s just one off from the first quarter, which saw 47 sales with an average sales price of $1.84 million.

Concerns about affordable housing at the Lake has prompted the Tahoe Regional Planning Agency to update rules to encourage more workforce housing on Tuesday.

The new rules allow properties in the Tahoe Basin to add an accessory dwelling unit if its rent is restricted and it’s located near a transit or town center.

A one-acre size limit applies on the Nevada side of the Lake, but owners of any size parcel in California can apply for the new unit. Units may only be rented for 30 days or more to keep the from becoming vacation rentals.

No, more like greedy realtors spiking up the market like they have in California. Doesn’t help you have a lot of people fleeing California because it’s fail state politics. Selling their overpriced multi-million dollar homes and have money to drop on a $600,000 house that use to be only maybe $300,000 here, like it’s nothing. COVID inflated material costs and maybe labor I’m sure play somewhat of a role but I’m leaning more towards realtors. I experienced it in San Jose where I lived many years ago. Progress love and hate it that’s for sure. I would not mind the influx of people if the county would update the road infrastructure to handle the influx to the local populace. Yet no they just keep building homes while the traffic gets worse and worse. I’ve seen so much road rage and the such this past year alone it’s really mind boggling. No wonder a lot of people have been selling and moving away from Gardnerville/Minden. So they can have the quiet life they once had here somewhere else again.