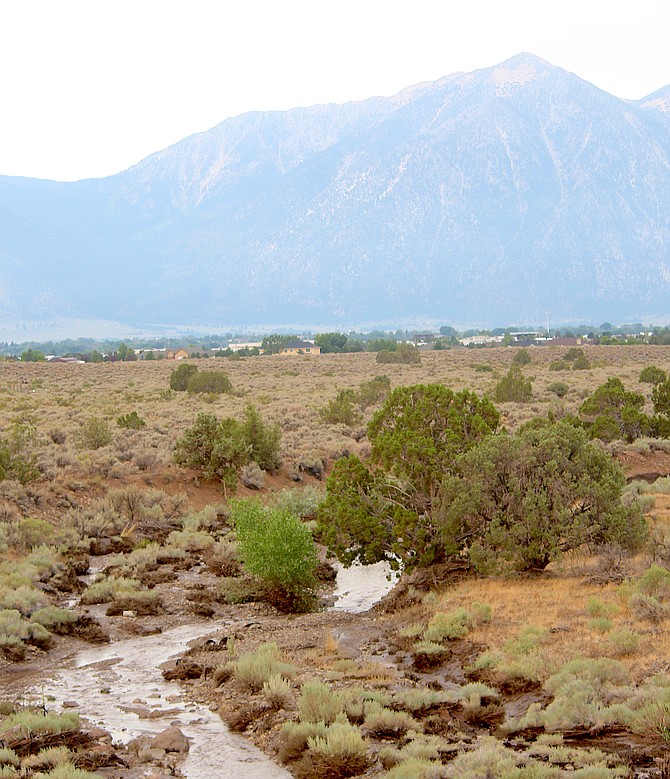 Pine Nut Creek winds its way into Carson Valley on Saturday morning after a thunderstorm caused flooding in Fish Springs.

Genoa, Nev. — Douglas County school trustees are scheduled to meet 4 p.m. today to discuss revising the plan for reopening the schools under the new mask mandate. The first day of school is in a week, so they’re scrambling to adjust. The agenda and how to participate can be found at https://meetings.boardbook.org/Public/Organization/1502

Martin Slough is the star at today’s Water Conveyance Advisory Committee meeting, including the impact of the trail from Lucerne Street to Chichester Drive and a project to replace the culvert at Highway 395 and Toler Lane that will drain the highway into the slough. The committee meets 4 p.m. at the Minden Inn.

Firefighters have a line around 82 percent of the Tamarack Fire with just the section on the southwest portion of the fire still to be contained. That thing will likely send up smoke from inside its perimeter until the snow flies.

A lightning strike west of Blue Lakes and over the crest was reported 3 p.m. Sunday. There are a couple of hotspots showing on the Nevada Fire Information map this morning near the ominously named Deadwood Canyon.

The air quality is as good as it ever is in the middle of wildfire season with a 34 air quality reading in Ranchos Aspen Park. Fire.airnow.gov map is showing most of the smoke is drifting over from the Dixie Fire burning near Lake Almanor.

There’s always a chance for thunderstorms to develop over the Sierra, but today is expected to be sunny with a high temperature of 94 degrees. The wind is expected to pick up tonight out of the northwest, bringing more haze and smoke from the fire.

Kurt Hildebrand is editor of The Record-Courier. Contact him at khildebrand@recordcourier.com