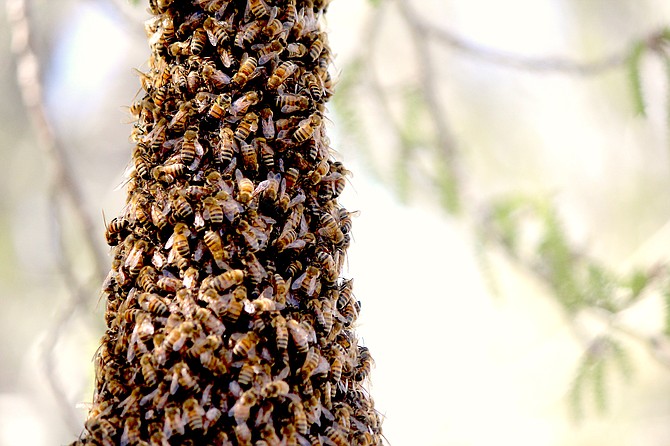 A silver poplar north of Genoa grew a beard of bees on Wednesday. Photo by Kurt Hildebrand.

Genoa, Nev. — I hear the Carson Valley Chamber of Commerce’s Job Expo was well attended on Thursday. With the impending full opening of Carson Valley, businesses are looking for workers.

The Carson Valley Museum & Cultural Center will be conducting its annual art and wine show over the weekend. They’ll be out on the lawn 10 a.m. to 1 p.m. at the center on Main Street in Gardnerville.

Main Street Gardnerville is hosting a town clean-up 9 a.m. to noon Saturday, including sweeping empty spaces. Muster at Gardnerville Station in the S-Curve with a broom.

If you have any electronic equipment or shredding that needs doing, the Sierra Nevada Chapter of ARMA International will be in the CalNeva Parking Lot in Minden 10 a.m. to 2 p.m. this weekend. They’re also gathering donations for Between Horses and Humans. Paper’s got to be unbound, and they’re not taking televisions.

Douglas High School graduation may kick off with a parade on June 5. That and the events application for Carson Valley Days go before the Gardnerville Town Board 4:30 p.m. Tuesday.

Work on Centerville Lane should be complete next week. It’s got a beautiful coat of asphalt, but there’s still some touch-up yet to do, including lines, grading the shoulder and installing signs. The road will be open over the weekend.

February was another strong month for Douglas County merchants, with taxable sales up 7.2 percent to $70.3 million, according to figures released by the Nevada Department of Taxation on Wednesday. So far the county’s taxable sales are up 11.9 percent since July 1.

Douglas County’s coronavirus caseload was 94 active cases on Thursday night, up two from Tuesday. We’ve been bumping along in the 90s for the last month or so. Community testing is returning to the Douglas County Community & Senior Center 9-10:30 a.m. Wednesday.

Thursday’s high temperature hit 81 degrees at Minden-Tahoe Airport, well short of the record of 88 degrees set in 2007. However, this morning’s low may be in range of the record warmest for today.

Expect another warm day today with a forecast high of 85 degrees. The wind will pick up out of the west at 15-20 mph this afternoon, gusting to 30 mph. That wind will cool things off, bringing the high down to 68 degrees by Sunday before it bounces back up again.