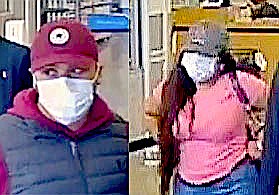 The identities of a man and woman are being sought by Douglas County Sheriff's investigators for credit card theft.

The pair are suspects in the use of multiple stolen cards, according to the Douglas County Sheriff’s Office, which is seeking the public’s assistance in identifying them.

All other leads have been exhausted.

Anyone who is able to identify either of these people by the clothing they are wearing or by features not covered by a mask is asked to contact Sheriff's Investigator Steven Schultz at 775-782-6206. Reference case No. 21SO100875