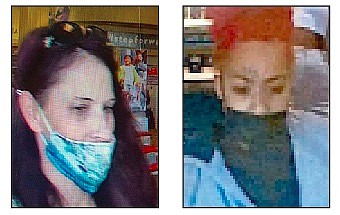 Shoplifters sought by the Douglas County Sheriff's Office. On the left at Famous Footwear, on the right Ulta.

On April 13, two women entered the Ulta Beauty Store located at 911 Topsy Lane in Carson Valley Plaza and stole an estimated $4,200 in merchandise. Both women ran from the store when confronted. They left in a white 2006 – 2008 Honda Civic with California license plates.

All other leads have been exhausted and the Douglas County Sheriff’s Office is seeking the public’s assistance at this time.

• Four days earlier, on April 9, a woman was seen putting on a pair of shoes at Famous Footwear on Topsy and wore them out of the store without paying.

She was last seen leaving in a green Ford Explorer driven by an unknown man.