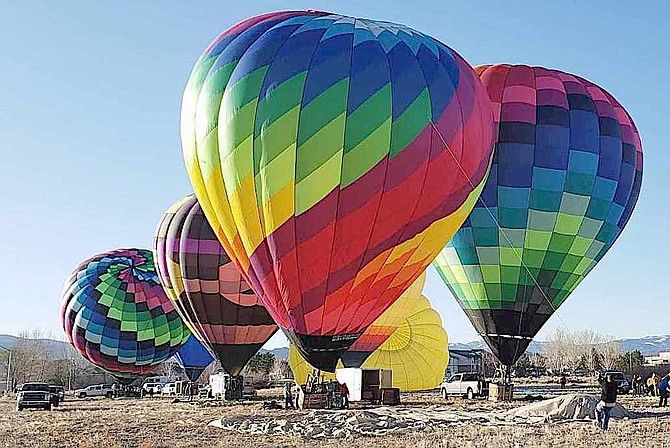 Hot air balloons gather south of Gardnerville on April 10 in this photo taken by Lisa Coffron of the Sierra Scoop.

It’s a rare, still morning when there isn’t a hot air balloon hovering over Carson Valley, and sometimes more than one.

Less than two weeks ago, 10 crews from the Northern Nevada Balloon Club turned out to Gardnerville for a mass launch, according to Lake Tahoe Balloons pilot Sheldon Grauberger.

While the company has been offering balloon rides for nearly 30 years, Grauberger has lived in the north Valley for the last four years after being recruited.

“We’re the company that flies people,” he said. “No one picks up passengers as a business in the area. We’re also the only company that lands on a platform boat on Lake Tahoe.”

Grauberger said business is expanding with a steady number of customers.

“We’ve had such a great response from people in Carson Valley wanting to take balloon rides that we’ll be here all summer long,” he said.

Typically, the company offers rides in Carson Valley in the spring and fall and then moves up to Lake Tahoe in the summer.

Flights take six or seven people to around 10,000 feet above sea level, or roughly 5,000 feet over the Valley floor.

Flights tend to be 45 minutes to an hour.

Carson Valley’s famous winds ensure that the balloonists have to be back down by 9:30-10 a.m.

While a balloon ride is subject to the whims of the wind, Grauberger said the pilot can sometimes guide the craft.

“You go wherever the wind takes you,” he said. “Rarely, do you ever come back to where you started.”

Grauberger has been flying for 18 years, which adds up to about 3,600 hours in the air.

A hot air balloon is considered an aircraft and requires a pilot’s license with the proper rating. A pilot with a private license isn’t allowed to take paying passengers. Grauberger holds a commercial license, which allows him to train other pilots, along with taking paying passengers.

It would be another 18 years before Grauberger would be in a balloon again when his wife surprised him with a flight during the Albuquerque International Balloon Fiesta.

A Realtor, he started helping out with the Re-Max balloon and a launched a new career.

A Las Vegan, he flew passengers over Glitter Gulch for years.

It was his daughter coming to school at the University of Nevada, Reno, that contributed to the family moving to Carson Valley.

“She called me up and said she was staying up here,” he said. “We had talked about moving someplace prettier than Vegas.”

“We love the small town feel,” he said.

On Tuesday morning, Grauberger had seven passengers drifting over Gardnerville.

“(Riders) expect there to be more movement,” he said. “It is the most amazing feeling. Just to float around for an hour and 20 minutes. I was able to use the winds to steer back to almost where we took off.”

A popular launching spot has been the field just south of the Grant Walmart in Gardnerville.

Grauberger invited anyone who’s curious to come down and watch them lift off.