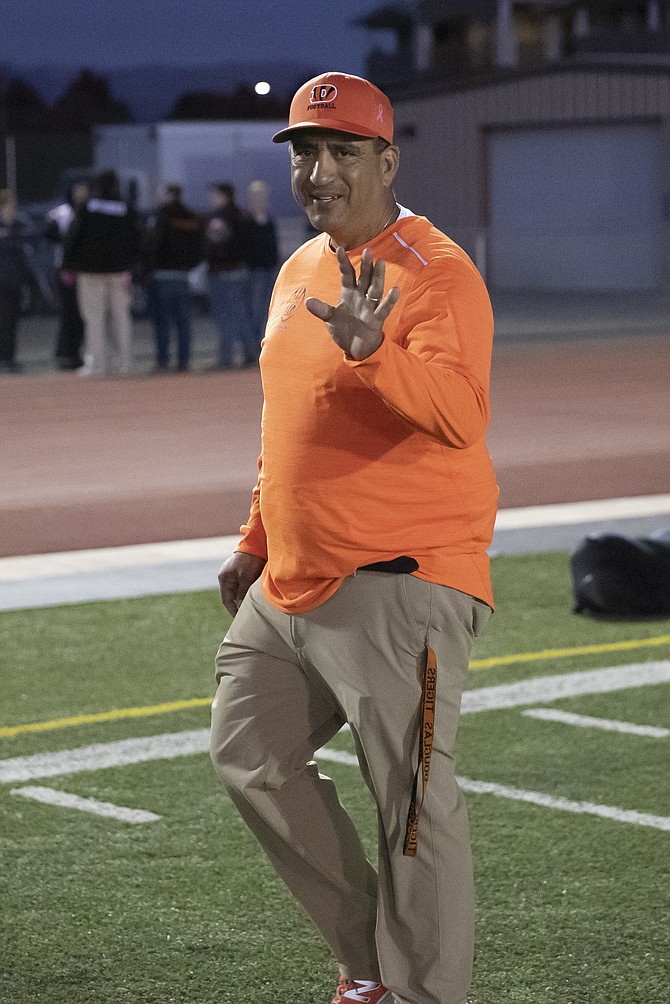 Douglas High football coach Ernie Monfiletto waives as he walks his home sideline prior to kickoff on a Friday night. Photo by Ron Harpin.

After first stepping foot on Douglas High School’s campus in 1996, Ernie Monfiletto decided it was time to retire from his career as an educator just two weeks ago.
He served as a football coach throughout the entirety of his tenure in Douglas County and is stepping down knowing his greatest accomplishments are all those who were able to flourish underneath the influential educator.
The respect he garnered from students and athletes helped change the way his young adults looked at the world.
His coaching tree starts from his college days, playing at Menlo College under head coach Ray Solari, but branches out exponentially once he and his wife, Jill, made the move to Northern Nevada.
Seeing Solari’s style of molding men carried Monfiletto’s passion into his own craft.
Monfiletto and Solari are still connected at the hip, despite his former coach being 94 years old.
The two exchanged a Zoom call just a few weeks ago.
To see the relationships Monfiletto carries with those around him, shows a window into what his players and students have learned to love about the longtime educator.
“He has touched so many people’s lives. Everyone talks about him with the utmost respect and everyone talks about how much he means to them,” said Douglas High junior football player Christopher Smalley. “He’s just a great human being.”
Blair Roman, who coaches at rival Carson High School and is a Douglas High graduate, said he and Monfiletto didn’t take long to become friends. Roman’s admiration grew from the opposite sideline after spending year-after-year against each other.
“Every game we coached against each other stands out. It’s a big game to the communities and the players,” said Roman. “Ernie Monfiletto is a class act and that is one of the reasons I respect him.”

Humble beginnings
Monfiletto’s move to Northern Nevada brought him into contact with another Carson Valley legend in Mike Rippee.
Rippee served as Douglas High’s football coach from 1996 until 2012 when Monfiletto took over, following Rippee’s retirement.
Monfiletto grew up in New Mexico and prior to coaching at Douglas spent four years at Green Valley High School in Henderson.
The Monfilettos opted to move north to avoid to sprawling growth of the Las Vegas metro.
“The turning point was one of my players had gotten shot and killed in 1995, Matt Reynolds,” Monfiletto said. “We decided to escape the fray.”
Upon arriving in Minden, Monfiletto started to build the web he is now attached to so fondly.
In nine seasons with the Tigers, he posted a 31-57 record.
Monfiletto will be the first to tell you winning will make a lot of headaches go away.
However, learning how to handle adversity and managing life’s challenges will undoubtedly be one of his more lasting impacts.
“Winning helps everything. It helps you sleep at night. Helps your mental health,” said Monfiletto, “but building the relationships with those kids and helping them through the hard times was more important to me than anything else.”
You could see the meaning of those relationships in their most basic form on Friday nights.
Several of Monfiletto’s assistant coaches were former players who wanted to come back and “coach with coach.”
“I first met coach when I was a sophomore in high school,” said current offensive line coach Joe Andrews, who graduated from Douglas in 2000. “Instantaneously, there was a bond with him. He has a way of building lasting positive relationships with people.”
Fellow assistant coach, and 2009 Tiger graduate, Tim Douglas felt the same impact.
He noticed it most recently, as he watched Monfiletto figure out how to coach through a pandemic in which nothing about Douglas’ season was guaranteed.
“This year has been extremely challenging. … The way that he kept preaching the same things to the kids,” said Douglas. “He really had those kids in the best spirits that he could.”
The challenges of the pandemic were new, but Monfiletto’s experience and caring nature has allowed him to advise students going through hardships before.
Handling players in trouble or students struggling in the classroom, Monfiletto wanted the students to know he was there.
Former and current players alike shared stories of Monfiletto assisting them out of trouble whenever they would call.
Even students who weren’t football players could expect to hear from Monfiletto in case of emergency.
“When I had him, I totaled my car at Douglas High School,” said Karen Lamb, who is currently the Douglas High leadership teacher. “He was the first person to call me and make sure I was OK.”
His selfless attitude made Lamb pursue her current career, something she is still thankful for.
“It’s his example that led me to do the things that I do,” said Lamb. “When I first came to Douglas back as a teacher, he was one of the first people to encourage me. I think he sets that example of the importance of getting to know kids outside of the classroom.”

Controlling the little things
Dominic Costarella, a senior on the Tiger football team, jokingly said he felt like he had been programmed by all of Monfiletto’s clichés.
Defensive coordinator Rick McGuire knows coaches can talk the talk, but he’s seen Monfiletto back it up.
“Ernie walked it; and he walked it from day one. It was about young men and the big picture,” said McGuire.
Even athletes that decided to go a different route were able to rely on the gracious ball coach if they needed.

“Some of our best football players over the last nine years couldn’t make the cut, we still supported them. I always thought that was pretty amazing. There was never any regrets about them not participating,” McGuire added.

Senior captain Cameron Swain said Monfiletto has been a father figure for him and even helped reconnect Swain with his own father.

“He is one of the greatest men I know,” said Swain. “I couldn’t have done it without him.”

Monfiletto was known for saying, There’s no need to look too far ahead, no need to worry over what might be; you’ve just got to “control the controllables.”
His impacts on the athletes around him are no secret, but Monfiletto doesn’t want to just be remembered as a football coach.
“I loved going to school every day. I loved being in the classroom everyday. There are a lot of clichés that come out of my mouth, but no place I’d rather be was something that was continually important to me,” Monfiletto said.
He started Douglas’ Block D Letterman Club to help show athletes in the community they can be more.
He taught government and U.S. history throughout his tenure in the classroom.
Prior to the pandemic, Monfiletto and a few other Douglas High faculty members raised $10,000 in two days to help pay for cancer treatments for campus security guard Dave Roberton.
Monfiletto said it was one of the most uplifting days of his career.
As a history teacher, Monfiletto had no problem telling stories to his classes and his family was often the topic of conversation.
“We hoped that those kids understood it was a connection to real life. I’m going to miss those interactions with the kids,” said Monfiletto. “I want to be remembered as an educator because that football field, that soccer field, that track, all of it is an extension of the classroom. If anything resonates from this COVID issue, it’s how important extracurricular actives are to get kids involved and keep them on a positive path.”
That positive path, the willingness to care, humility in the face of life’s challenges is what has caused so many to look up to Monfiletto over his career.
Monfiletto said his decision to retire was just timing and wanting to do right by his wife, who has supported his coaching career.
As he steps away into retirement, it’s those aspects of his character that will be missed the most around the campus of Douglas High School.