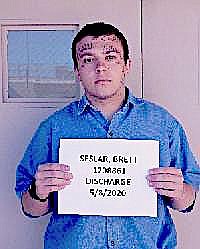 A Carson City man who admitted to stealing two pairs of shoes from a Topsy store last fall will have to serve six months in jail as a condition of a suspended 2-5-year prison sentence on Tuesday.

His attorney said one pair was to apply for a job, while the other was to sell for drugs.

Seslar said he has been using drugs since he was 7.

Despite his young age, Seslar has already served a brief time in prison and was paroled in December 2019. Prosecutor Patrick Ferguson said Seslar absconded the following month.

• A 30-year-old Pollock Pines man received probation for possession of heroin on Monday.

Tanner Edward McCann is still on probation for a felony burglary charge in California.

Probation was mandatory in the felony possession case stemming from McCann’s Nov. 5, 2020, arrest in Stateline.

He was sentenced to 12-30 months in prison and given credit for 15 days time served.

• A Gardnerville man required to register as a sex offender admitted to failing to verify his address in November as required by law.

Brandon Isaac Jesse Clark, 25, agreed to plead guilty to the felony on Tuesday. Should he complete probation he will be allowed to withdraw his plea.

Clark was convicted of gross misdemeanor statutory seduction in 2015.

• An Indian Hills man admitted to a gross misdemeanor charge of capturing an image of another person’s private parts without their consent on Monday.

• A Yerington man was granted diversion on a methamphetamine possession charge on Monday.

He was arrested Oct. 8, 2020, after being stopped in a vehicle that was reported stolen. The theft charge was dropped, but during a search, deputies found drugs in the vehicle.

Hale will be undergoing testing and quarterly reviews, but will not be participating in Western Nevada Regional Drug Court.

If he succeeds the felony charge will be dropped and Hale’s court records sealed.