Minden has big bakery in the oven 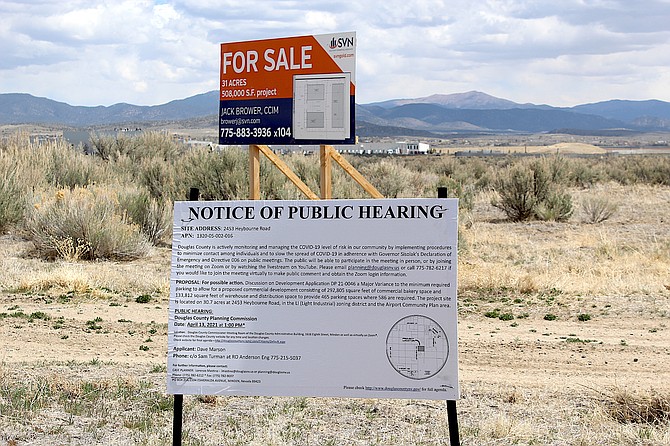 A new commercial bakery is proposed for a site along Heybourne Road near the Minden-Tahoe Airport. Photo by Kurt Hildebrand.

The former owner of Nature’s Bakery in Carson City is seeking to build a new waffle factory in Minden.

In February, the new company purchased the site next door to VIP Rubber and Plastics for $4.5 million.

According to the company’s web site, it is currently manufacturing waffles for sale to K-12 school districts. The company was founded in 2019, according to Marsonfoods.com

On Tuesday, Douglas County planning commissioners approved a major variance for the Carson Valley project, allowing the company to have 465 parking spaces rather than the 586 required by county code.

The commercial bakery, warehouse and distribution center would occupy 11 acres of the site, with the rest devoted to parking, access, landscaping and loading areas.

The first phase would include a 66,906-square-foot bakery, warehouse and all of the parking. The property access would be from Heybourne and Bliss roads.

The company expects to start out employing 15 people per shift.

They also plan to lease out a portion of the structure to other manufacturers. Proponents said that at most the employee counts for the property could eventually reach 120 per shift.

Planners pointed out that parking requirements for factories are out of date, since they tend to have a lower number of workers per square foot.

“In the past decade industrial and warehousing operations have been evolving to significantly decrease the need for human power to produce, store and distribute goods due to various levels of automation.

The bakery will be in sight of the Starbucks Roasting Plant, which marks 20 years in June since it announced it had selected Carson Valley for its new roasting plant.