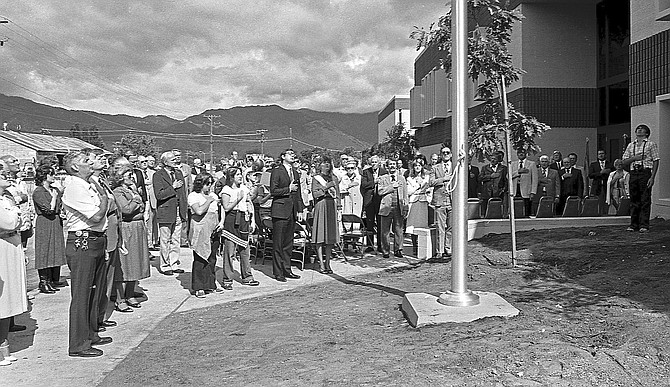 The largest and arguably most important puzzle Douglas County has to solve over the next five years is providing more room for its public safety sector.

The Judicial and Law Enforcement Center in Minden turns 40 next year and has been filled to the gills for about half of that time.

The county has been working on new space for the center for years and commissioners voted to make it a priority in 2017.

Costs to expand the center have ballooned from $32 million in 2017 to more than $56 million today.

A big chunk of that would go to a parking garage on the property.

The center presently houses the Sheriff’s Office and jail, three courtrooms and their court clerks, the District Attorney’s Office, Juvenile Probation and a variety of other public safety related organizations.

Rather than trying to expand the center at its current site, county officials are proposing purchasing a site for another structure that would house everything but the Sheriff’s Office and the jail.

That would shave nearly $20 million off the cost of the project, coming in at an estimated $38.58 million.

The first step in the process is to purchase a 14-acre site for $2.8 million, which would lock the county into proceeding with the two-site plan.

Funding for the purchase would come from the capital project fund and a reimbursement to the general fund from CARES Act money.

That would provide the funding required to acquire the site and do preliminary design work.

Staff would bring back a plan showing the funding.

“It was a unique set of circumstances,” County Manager Patrick Cates said during the capital improvement project budget discussion on Wednesday. “Part is the CARES Act, part is that we did a lot of belt-tightening and withheld a lot of expenditures, and the economy performed much better than we expected. It was a unique storm where the county has the resources to take care of some of these longstanding needs.”

Under the budget proposal, work on a new judicial building would run around $29.5 million and would occur in 2023-24.

With a new judicial building in place, the cost to remodel the current center would run $3.16 million and could be done without substantial phasing.

“We should do as much as we can to continue and take any money we’ve got to pay as you go, so we don’t obligate the county to anybody else,” Commission Chairman John Engels said.

Accepting the capital improvement plan including the judicial center proposal was the final step in this week’s three days of budget hearings.

Commissioners met roughly 12 hours over Monday and Tuesday to go through the $111.5 million budget line by line. Total projected revenue for the budget starting July 1 is $124.4 million.

Of that, $53.7 million goes to the general fund. Total projected expenditures are $50.79 million in the general fund, which pays for the various county departments, including the law enforcement, the judiciary and the county’s constitutional offices.

The three towns have their own tax rates and budgets, which they also worked on this week. They will present those budgets to the county next month.

Local governments are required by state law to submit a tentative budget by mid-April.

Final budgets are due in May.