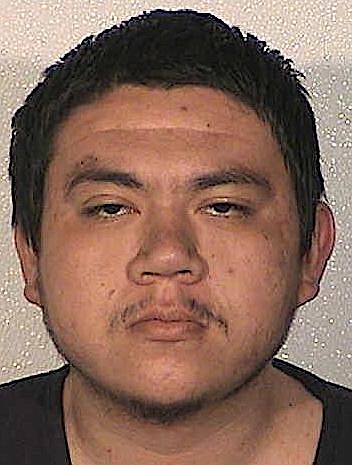 A man who walked into a Topsy Lane optometrist with a bloody sweatshirt on Wednesday is wanted in the slaying of a Sparks 60-year-old.

Olson Beltran, 26, of Sparks was arrested at gunpoint by Douglas County deputies after they learned that he was in a vehicle reported stolen.

Beltran was arraigned on the stolen vehicle charge on Friday morning where he yelled “Not guilty!” at East Fork Justice of the Peace Cassandra Jones as she tried to arraign him.

Jones appointed defense attorney Maria Pence to represent Beltran in the stolen vehicle case when he returnes to court on Wednesday.

According to Sparks Police, Beltran is being sought in connection with the death of Jose Garcia-Ornelas about three hours before he was arrested in Douglas.

Police were notified that Beltran was in Douglas custody shortly after his arrest. Sparks detectives collected his clothes and belongings and tried to interview him. They anticipate charging him with open murder of a victim over 60 years old.

The Nissan Murano was reported stolen in Reno and belonged to someone besides Garcia Ornelas.

According to witnesses, Beltran walked into the optometrist’s office asking for an appointment. Concerned about him, they called the Sheriff’s Office.

He was sitting in the Murano in front of the business when a deputy arrived. After finding out the vehicle was stolen out of Reno, the deputy called the optometrist and had them lock the doors.

According to court documents, Beltran got out of the vehicle, tried the door and was walking to a neighboring shop when the deputy detained him.