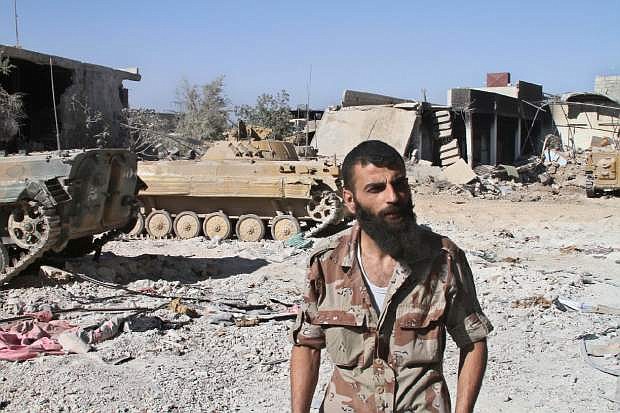 In this photo taken on a government organized media tour, a Syrian army soldier walks on a street in the Jobar neighborhood of Damascus, Syria, Saturday, Aug. 24, 2013. Syrian state media accused rebels of using chemical arms on Saturday against government troops trying to storm a contested neighborhood of Damascus, claiming a major army offensive in recent days had forced the opposition fighters to resort to such weapons &quot;as their last card.&quot; State TV broadcast images of plastic jugs, gas masks, vials of an unspecified medication, explosives and other items that it said were seized from rebel hideouts. It did not, however, show any video of soldiers reportedly affected by toxic gas in the fighting in the Jobar neighborhood of Damascus. (AP Photo)