'He's always been a hero in my eyes' 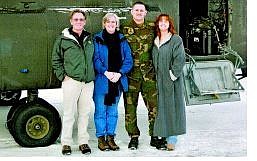 Submitted photo The Stewart family stands by a Chinook helicopter prior to Sgt. Patrick Stewart&#039;s deployment to Afghanistan. Pictured, from left, are Steve, Sandy, Patrick and Roberta Stewart.