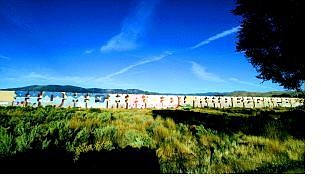 BRAD HORN/Nevada Appeal Artist Erik Burke&#039;s mural &quot;Homemaidlandescape&quot; was painted on the back of the Highway 50 Business Center in Carson City last weekend. The 26-year-old man will be displaying images from the two-day process at the Courthouse Gallery starting Sept. 29. Work from five other artists will be on exhibit as part of the &#039;What Up?&#039; show.