Area photographer shares his thoughts, images on the aftermath of Katrina's devastation 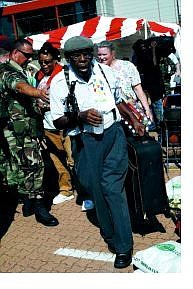 Court Leve/Appeal News Service Hurricane Katrina victims are directed toward buses on Tuesday so they can be evacuated from the New Orleans Convention Center. Many evacuees are expected to start arriving in Nevada on Monday.