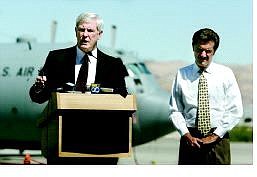 Cathleen Allison/Nevada Appeal Nevada Division of Emergency Management head Frank Siracusa, right, listens as Gov. Kenny Guinn talks at a press conference at the Nevada Air National Guard facility at the Reno-Tahoe International Airport Tuesday afternoon. Northern Nevada is expected to received about 300 evacuees from the Gulf Coast. State officials say they&#039;ll be ready today, but are not sure when the evacuees will arrive.