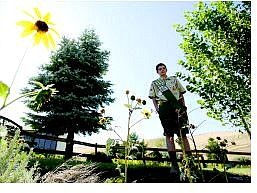 Life Scout Robert Parks stands on the fresh sod he and his volunteers used to create a small dog park at the Nevada State Railroad Museum as part of his Eagle Scout project. Parks, 13, will complete the requirements to earn the rank of Eagle Scout before his 14th birthday.