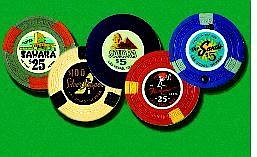 photo illustration by Rebecca Enerson/Nevada Appeal News Service. These classic casino gaming chips are among those being auctioned on eBay. The opening bid for more than 6,000 casino chips and tokens has already reached $1 million.