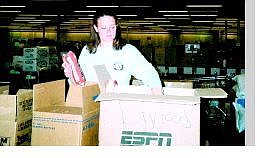 Photo submitted Brandi Duncan works in a warehouse in New Iberia, La., where she and her Americorp team are sorting out food that was donated to be distributed to hurricane victims.